I felt silly sitting idle in the camp. So after a bit of rest,  walked out towards Chandrataal again at around five. At the lake, I met two local shepherds, one of which turned out to be Pradhan ( local title for Chief). He seemed agitated as an idiot had put up his tent right on lake shore and was rude when reminded of the rules.   As I still wanted to visit Samudri Taapoo,  I asked him about a way to cross the river or an alternate route. Turned out that his friend was going to cross the river next morning. But it was a one way trip. He was to gather his flock across the river and go back towards some place in general direction of Batal that would have taken 2 weeks or more. Tagging along with him was simply out of question. I didn’t have that much time and even if I did, following the routes of shepherds at their speed was not a good idea for a trek either. Dejected, I waved them goodbye and set about to walk around the lake. Pradhan invited me to his camp for a cup of tea and dinner to which I agreed to partake at a later time.

Lake water was cold but not much. I was wearing sandals at the time and started to walk in the shallow water near shore. It was fun for a while. :) The duck family was in the water again with an adult flying around.  The sun was just above near by mountain peaks and the views were breathtaking. Upon reaching other end of lake, I was curious to see if there was anything interesting on the grassy plain area, so kept walking. After 1 km, there was a fast muddy stream flowing down from one of the mountains. I also came across a burrow about 1 feet across but no animal visible. Didn’t feel like poking around to inquire further, so left it alone.  Si later told me that it probably was a Marmot’s burrow. A Pika like animal, only 6-7 times bigger.

By now, it was almost dark as the sun had set completely and stars were coming up. But most of the sky was covered with dark clouds even with a strong breeze  blowing. This breeze fascinated me. It starts every morning around 10-11 am and goes on for 10-12 hours daily. Due to this, people have to wear warm clothes even when it’s bright and sunny. With strong regular wind like this, I doubt that people in Spiti need dams or coal for electricity. As far as I was concerned, I was very happy without the electricity and gadgets so far. No cell-phone signal for tens or perhaps hundreds of kms, imagine that :). My only related need at that time was charge of my camera battery. But I managed to click approximately 1200 photos before it went down. One can always use portable solar panels for charnging, but I wasn’t carrying one

Coming back to the topic, upon reaching the stream I decided to turn back due to the dark. Turned on my torch and started to walk back. This must have agitated the dogs of a shepherd on a nearby hill who kept barking till I was in their eye-sight. The lake at that time was nothing like the placid and tranquil water body in morning. There were a lot of waves due to wind and it was difficult to stand in the water and maintain balance. I was hoping to click some photos of night sky reflected in lake waters, but it was clearly not possible.  It was foolish standing there to wait and test my luck further, so started to walk back to my camp. Found a brownish 3 inch across spider in my path and I could swear that it’s eyes shone in torch’s light. No other insect or animal there except a few small things which were barely visible. No snow leopard, ibex, bear, deer or wolf either. :-< Not even  story of a strange monster in water that night.  Or may be there were and I couldn’t see them. Who knows !

The walk back was uneventful and I had little difficulty in locating the trail back to camp. Found Sunny and Si about to begin their dinner. Didn’t feel like eating Dal, Chawal again, so turned on my stove and warmed a Ready To Eat Meal. It was hard work turning on the stove in that wind, so gathered some rocks and made a small shelter. It was some south Indian tomato-rice dish, don’t remember the name.  Slept soon after and woke up at 6 again. I was curious about seeing the lake in it’s entirety and Si suggested me to climb one of the near by mountains.

I left the camp soon after and met Pradhan in his camp. He was churning ‘chaach’ (buttermilk) in a goat skin bag to make some butter while his friend was leaving for his journey across the river . After seeing him off, Pradhan made us a cup of tea and added a big spoon full of ghee in to both. I had heard of butter tea of Laddakh, but drinking tea with ghee was a novel experience. May be I just imagined it, but it did provide immediate warmth. After finishing tea, he called up his four dogs which were dozing nearby for their breakfast of chaach and  rice. I was told that the dogs are mostly fed whatever they eat. They didn’t seem very happy to see me though. After a bit of chit-chat, I thanked him for the amazing tea and left.

The mountain I wanted to climb was not far away and I soon started climbing. The slope was again covered with loose rocks and soil. Combined with somewhat steep slope, it was again a tough trek. I avoided loose and unstable gravel and preferred rocks for walking. Although I had seen goats grazing almost all over the place, I could find no trail there. After 40-50 minutes, I came across a small waterfall of seemingly crystal clear water. But it had small particles of gravel and was undrinkable. I had neglected to carry any water with me and it was not a nice feeling. There was little water anyway and it disappeared in to rocks just 15-20 meters down from where I found it. 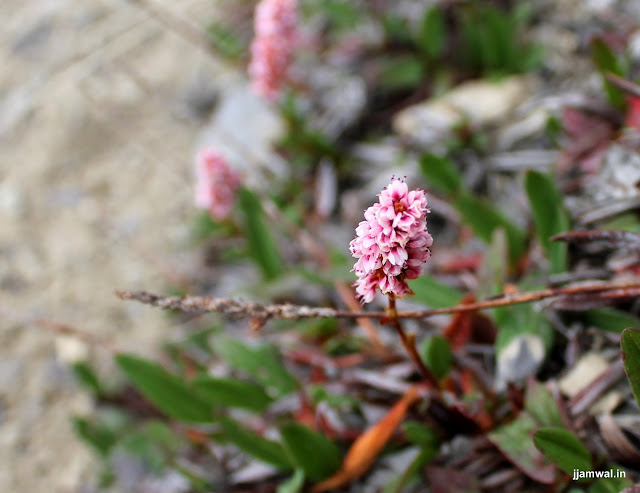 But my primary purpose was still not complete. From that location, only a half of the lake was visible. But it wasn’t possible to climb on vertical ledge. So I walked on further towards left of the mountain till I could see all of the lake. It looked a bit like Batman’s logo :D . Check the picture if you don’t believe me. By then I was  on a fairly high position on the mountain and the people walking below looked like ants. I wondered if it was possible to go still higher as half of the mountain still lay above. But it was almost a vertical climb after that. So after savouring the view for some time I climbed down, which was easier than climbing up. Took a dip in ice-cold water of the lake and walked back to my camp to get something to eat and rest.

After yet another meal of daal chawal, I lay down in my tent to rest. Woke up in afternoon and went out to explore the area again. This time hills behind the camp .  First thing I noticed were quite a few dried out ponds, swamps. Some still had that longish grass but no water. A few meters ahead there was a weird small pit, approximately 2-3 meters in diameter with completely black stones. First thing that came in to my mind was something like Devil’s Kitchen/fire site….lame, I know. Beyond that there was a dry swampy area with small pits and paths where water used to flow. The area was covered with green grass and most of the pits were still muddy, indicating that the water had dried off not too long ago. Additionally, there were small springs here and there, but the water was too less.

After some time, I left that grassy area to climb the adjoining hills. Chandra river was just on their foothills but it was almost a straight drop of 1000 meters more below. Even that place afforded some amazing views as the river passed through mountains gaining more volume as more streams joined it. At sme places it was just 3-4 meters in width, while at others in was divided in to numerous small streams spread over a large area. After follwoing the river for some distance over the hills, two other campsites were visible just as small specks. The walk after that got a bit difficult as it was almost a steep mountain face that I had to climb down. Upon reaching the foothills, I walked to the river and rested there on it’s bank. Never wanted to be anywhere else. 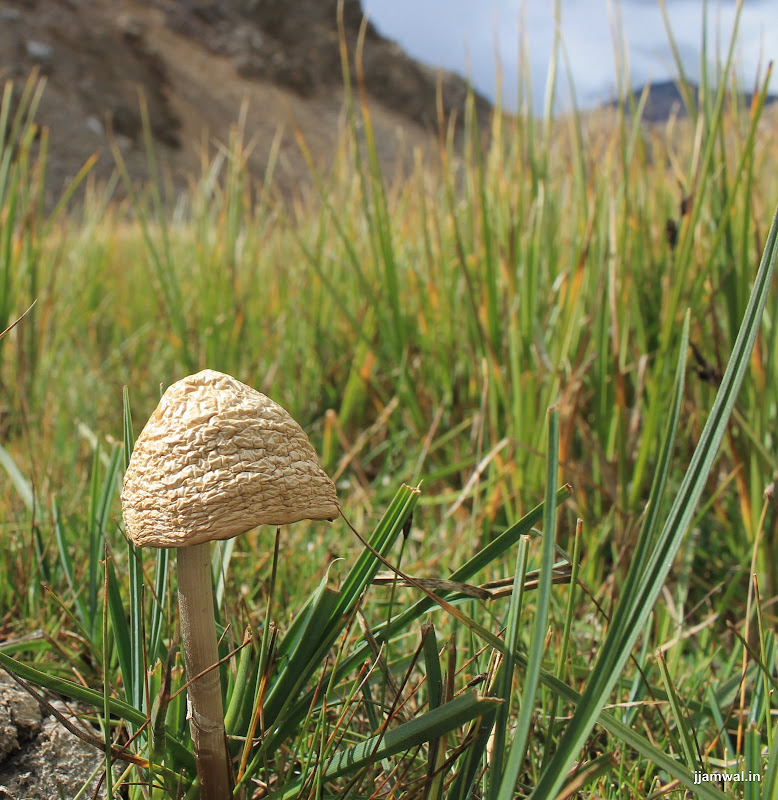 It was getting dark at that time and dark clouds had already covered the sky. So I started to walk back towards my camp. I had to cross one of the campsites along the way and it filthy as hell. The area was full of water bottles, wrappers and other rubbish. Even a small stream flowing near by was choked by plastic bags. Those idiots should be fined and their license canceled.

By the time I reached road which led back to my camp, it stared raining heavily. I put my camera inside my bag and kept on walking. Came across a herd of mules which seemed to be in misgiving mood with no human handler in sight. Gave them a wide berth and kept walking on the road.   AFter 10-12 minutes, the rain stopped and I met Pradhan whose sheep was grazing nearby. His goats on the other hand, were on a mountain half a km away, but still visible. We walked back to Jamaica’s camp and found him with some foreign guests. After a cup of tea, Pradhan left but not before reminding me of his invitation for dinner.