I rested in the camp for a while, enjoying some idle chit-chat with the new tourists till it got completely dark. It was just a half past 7 then. The rain had nothing to dissipate the clouds and the sky was completely overcast. I told Sunny to not prepare any food for me and left for Pradhan’s camp. It was hard following the trail with a torch as the rain had washed out all the footprints and most marks of the path. Thankfully, it wasn’t very muddy. The camp was about a km away near the foothills of the mountain I had been to earlier in morning. 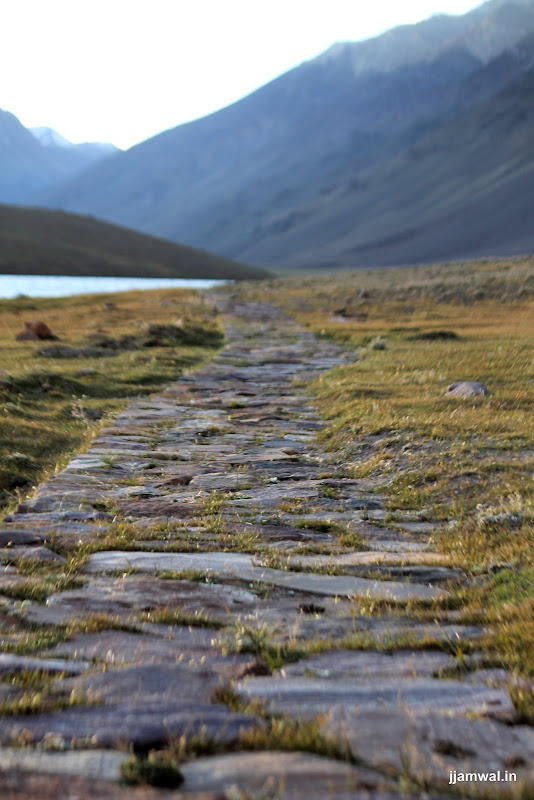 Although, I was aware of the general location but had a hard time locating it in pitch dark. Previous night, I could see a lamp illuminating his camp from a distance, but that night there was nothing. Then I saw hundreds of gray-blue points of lights in torchlight. As some of them blinked, I realised it was his flock of goats and sheep staring at me. As I walked closer, I heard dogs barking not too far away and slowed down. It wasn’t a good idea not to heed their warning. Just then, I heard Pradhan shouting loudly to hush them up. He was away from the camp and came walking in towards my direction. One of his sheep with a young kid born that morning was missing and he was gone to look for them near the lake.
We walked in to his camp and he lit a small kerosene lamp for light. I think, I should explain how their camps are. As I had left my camera back in camp due to rain, I have no pictures apart from a couple of an empty one.
The dwellings are roughly circular, made of stones 1+ meter in height and 2-4 meters in diameter. It’s not possible to stand inside unless you’re really short. Thy don’t use any mortar or earth to keep the stones together. A plastic sheet slung over the structure makes the roof. There is a small hole in ground for a fireplace to cook and keep warm. Some space is provided within stone walls where stuff like rations, fuel, utensils etc are stored. I was told that a team of 4 men can make such a hut in a day. As there are no trees, Yak dung is the major source of fuel. Floor is covered with goat/sheep skins and grass for warmth. There are few options for contact with outside world except a radio or cellphone. Even those are mostly unusable in most of areas they travel through.

So, we were sitting in a similar camp talking as he prepared a fire and put on some water to heat. Yak dung burns with a prominent blue flame, new thing for me. After a while he went out to get some milk from goats. As I walked out, his dogs which were at some distance away in the dark started barking at something further away. The animals get nervous around strangers, so I stayed near hut. A light drizzle was still going on at that time. After finishing milking , he put it away and started kneading dough for rotis. At first, he took really big pieces and made rotis atleast 1 cm thick and as big as the tawa (flat heating pan). I watched fascinated, a bit excited at the chance to sample unique kind of food. I was also a bit worried if it was possible to eat those things. Guess my puzzlement was too obvious as he said that those roti were for dogs not us. I think I was a little disappointed.
After cooking 3 or 4 such rotis he started making regular sized ones for us. After his bigger ones cooled down, he soaked them in chaach and fed the dogs. He had already prepared a dish of cabbage in chaach which only needed a little heating. After dogs were fed, we started to eat. I had a taste of rotis after 4-5 days and the meal tasted delicious.
I asked him lots of questions about their way of life and I’ll try to explain it in my own words as best as I can.

Pradhan and some of his companions are from far off places like Solan where they have their families, fields etc. The shepherd men leave their homes in March, April as soon as the snow begins to melt with their flock and keep on traveling over the next 3-4 months in search of pastures. Sometimes they find good ground and may stay there for a while. Otherwise they keep moving to prevent their animals from starving. They start their journey back home in late August or early September before snowfall which may take another 2 months, may be more. In nutshell, they spend 7-9 months in a year away from their homes. In their absence, women take care of fields, crops etc. Their main source of income is wool, selling old animals for meat and sometimes milk products. As they spend most of their time away from populated places, selling milk isn’t an option and they usually consume it or extract ghee.

Their day starts usually with sunrise or sometimes earlier as they lead their flock to different grazing places almost everyday. If they have mixed flock of goat and sheep, then both need different care. Sheep aren’t as agile as goats and can’t reach some places specially when they’ve gained weight. They also need mules to carry their supplies which are usually kept separate from rest of animals. As many of grazing grounds fall in forest lands, shepherds need permits to use them. Sometimes, they are stalked by wild animals like wolves, leopards etc. Guard dogs usually take care of this problem . I saw one guy carrying a gun, but that’s not common. But the bigger danger is from inclement weather. They may lose animals due to landslides, snow, floods etc anytime. The compensation they may receive from government is hardly worth the trouble. Rash drivers on roads are another nuisance. As their animals are their only wealth and primary source of livelihood, they work very hard to take good care of them.

As he told me about his home, I came to know that his 3 children have done pretty well for themselves. His eldest son is an engineer in state government, other got in to Indian Navy the previous month and the daughter was trying for a teacher’s job. He himself was educated till 10th, but left school in 1970 (approximate date). Not bad at all. :)

I gave him some of my Ready To Eat Meal packs and showed him how to prepare them. After that, I thanked him for probably the most interesting dinner I ever had and left for my own camp. The dogs apparently don’t care if the stranger is going away from them. They kept barking in a different direction. Finding my camp was a bit easier than Pradhan’s as Jamaica was having a little party with his foreigner friends and guests.

As I stood outside my tent, mother of Jamaica’s friend asked if I had any ear-plugs. As I had none, she advised me to protect my ears as her son snored very loudly as did another guest. I laughed and thanked her for her advice and crept in to my sleeping bag. I woke up after sometime to a slight rustle outside my tent but didn’t pay it much attention. Next morning an Indian tourist told me that he had probably seen a wolf near the lake. I thought he had mistaken a shepherd’s dog for a wolf. Next day, Jamaica said that a wolf had indeed paid a visit to our camp. The rustling I had heard was that wolf investigating our tents. Can’t be sure because no one had seen it.
I had been walking outside alone till past 11 in night when Pradhan’s dogs were barking probably to scare away that wolf.
Ah well…