I never ever imagined that I’ll ever wake up before sunrise without an alarm. That day was no exception. Woke up a few minutes before 6, rested and refreshed. Sleeping in a sleeping bag inside a tent is not uncomfortable after all. Got out of the bag and then the cold hit. The difference between the day and night temperatures must be 25 degrees or more. In simple words, it was cold. I hurriedly put on my jacket and stepped out of the tent. The view outside was stunning, to say the least. Grey, white clouds were  idly strolling between mountains peaks giving the impression that the mountains were smoking. 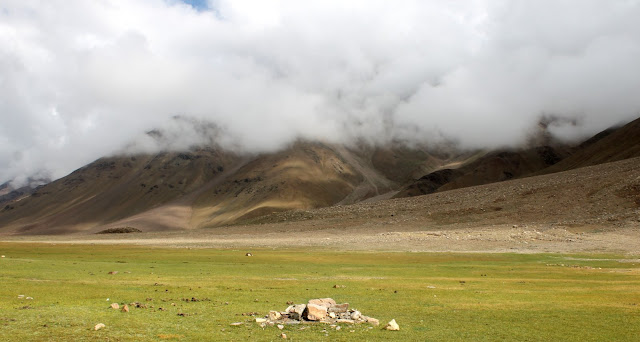 Jamaica, his helper Sunny, Si and 2 other tourists  were already outside drinking tea. I asked for a glass of hot milk and mixed some drinking chocolate that I had brought with me. Combined with the scenic mountains in front of me, I couldn’t have asked for more. After finishing  chocolate milk, I picked up my camera and left for Chandrataal (Chandertaal) lake. But first, I want to make somethings clear:

1) The lake is not origin of Chandra river. It only contributes a small 4-5 inches deep, 3-4 meters wide  stream to a big  seasonal nullah which itself remains mostly dry and merges in to Chandra river much later.  That small stream vanished after flowing for 300-350 m in between rocks  when I was there. Chandra river is made of two major streams one of which originates from Samudri Taapoo (Translation:- Sea Island) and another from a glacier less than 2 km away. More on these two later

2) According to markings made by government officials the lake’s circumference is 4.5 km, not 2.5 as claimed in many websites

3) According to how it’s pronounced , it should be Chandrataal not Chandertaal or Chandartall as it was on a board in Batal.

4) Camping within 2 km of lake and using soap, dumping etc in lake waters is not allowed. Even after reading the warning, too many ‘educated, intelligent’  people try to pitch their tents right up to lake and don’t even pickup their trash.   No sign of any kind basic intelligence. As if stupid tourists were not bad enough, even the concerned departments don’t have enough resources to pick up and dispose of trash in a proper way.  The camping grounds which are within 2 km of lake probably will be shifted to a proper place. But vehicles will be allowed to get within half a km of the lake.

Anyhow coming back to topic, I left for lake but didn’t follow the trail. Once again, I saw Samudri Taapoo before I saw Chandrataal and that piqued my interest. Made a mental note of visiting that place too.  After crossing 2-3 small hills, the lake came into my view rather suddenly. Whatever travelers say about beauty of the place is not exaggerated. It is unbelievably beautiful beyond words. The water is so clear that you can see the bottom absolutely clearly for a long distance. Perhaps due to high altitude, there are no plants, weeds, fish etc. Only aquatic life are a few specie of insects which aren’t easily visible either. Viewed from certain angles, clouds and surrounding mountains are perfectly reflected on tranquil waters almost like a mirror.  I sat there for a long time taking everything in, then started walking. After a few minutes, I found a Pika (small rodent like animal) on a small rock and managed to take some pictures of it. Ordinarily they are quick as bolts of lightning darting around rocks and burrows. Si later told me that they are sluggish during early mornings, unlike rest of the day.

I kept walking and reached other end of the lake which has a flat grassy meadow going up to some distance. A family of migratory ducks which had escaped my notice till now, immediately took to water quacking loudly.  I was carrying just my 18-55 mm lens, so wasn’t able to get any good close up shot.  At least I could click some photos of the insects, worms etc they eat :D

Path around other half of lake is paved by stones and marked for distance every 50 m. A lot of small birds which had really good grey brown camouflage were making loud calls nearby.  I could hear many other birds but could spot only two  types.  I walked slowly looking waiting for sun to come up but it took a really long time for it come high enough. By that time, I was back in the camp. A few tourists were already there getting off their vehicles. Most of the people I saw there, came only for 1-2 hours. They drove as far as possible, walked up to the lake and then went back immediately. Only a few stayed for a night and even less for more than one. Suited me just fine. Less idiots to spoil the place.

I asked Jamaica about way to reach Samudri Taapooo and he replied that it can’t be done. There is only one way to cross the fast flowing Chandra river which flows in between and that is a steel rope slung across the two river banks. One has to tie himself to a rope and pull himself across. I believed him but still had to see for myself.

After a short nap, I set out to explore the area again. Around 300 m away from the camp, there was a small dried out swamp, but it still had quite dense grass with patches of dried out black earth.  After climbing a small hill,  I could see a herd of goats grazing in a comparatively flat area 500-600 m below.  Two human figures, no bigger than an ant were also visible at some distance. Way to reach Chandra river was just across the hills on other side. There was only one narrow trail going down, but that was over a mountain face covered by sharp stones. I guess it was slate mixed with some other type which I couldn’t identify. Reaching the base, I walked around till I reached the cliffs directly overlooking Chandra flowing 700-800 m below.

From that distance, two rope ways over the river were visible, out of which only one seemed to be in use.  Saw those two shepherds at the river bank and waved. They waved back and signaled me to come down. Shouting was not an option due to river’s noise and distance. The path they indicated, turned out to be a very steep dried out seasonal waterfall. I wondered if I had misunderstood, but that seemed to be the only possible way. Taking a deep breath, I started climbing down very carefully, sometimes using my hands for support. It wasn’t as difficult as it looked and I reached the river bank pretty quickly to find those two sitting on the rocks and smoking bidis.

After some small chit-chat, I asked them about a way to cross the river and if any guides were available to which they replied negatively. Guides don’t come this way, I was told and it was very dangerous to use the ropeway, specially for a stranger.  I knew the reason within a few minutes as one of the shepherds stood up and walked to the ropeway to cross it. He first tied a thick nylon rope through a metal loop on the steel rope and  put a blanket on the rope to make it a bit comfortable. Then he put his legs through it and started to drag himself to the other bank  by pulling on the steel rope. Before that, he must have tied and retied the knots at least 5-6 times  before he was satisfied with the setup. I knew it wasn’t easy, but didn’t expect it to be that hard either. After he reached the other side, he lay there on his back for 10-15 minutes resting.

Somewhat discouraged, I walked around the river bank taking in the sights. There was no way I could cross that river using that ropeway with even half my gear. The riverbank itself was barely 25 m wide at its widest and just over 200 m long. It was obvious that water must engulf  the whole area in spring and heavy rains. The sand and rocks were still wet.   In meanwhile, other shepherd had climbed up the waterfall to his flock. I waited for the animals to move away before climbing back up. Goats, sheep etc care not very careful about anyone being present downhill and roll down lots of loose stones while foraging.  Climbing up that steep gradient with all those loose rocks and soil was somewhat more difficult than going down.

After that I walked around for a while aimlessly hoping to find something interesting. Only thing that came close was a big rock broken neatly in two with just enough space for a person to squeeze through.  I didn’t feel like going back the same way I had come, so kept on walking here and there. Samudri Taapoo was in my sights almost the whole time, mocking. I found a trail after walking for 40-45 minutes but it too was on a very steep gradient and covered with sharp loose rocks and soil. There was no other way, so I had no choice but to climb that way.Looked like only animals used that trail as there were no human foot prints visible.  It was really hard work and I must’ve stopped at least 5 times on those 600 m to catch my breath.After a lot of huffing and puffing, I finally managed to climb that cliff and walked in to an easier area. There were a lot of dried out seasonal ponds which have water only for a few months in spring and early summer. The dried out soil was covered with small strange looking plants of different colours, white, red and green. A lot of birds there too. Finally after walking for 30-40 minutes, camping place was visible and I dragged myself back to have something to eat.

This post is too long already and I haven’t finished with the day yet . More in next post.