Skip to content
I woke up at around 4:30 pm and went out of tent to find Jamaica was back. He had brought back some supplies was with him and was busy putting them away. As we chatted over a cup of tea, a guide came up and said that a foreign tourist had fallen sick and needed medical care. Turned out that a large group of tourists were doing the Zanskar to Spiti trek and one of them was showing symptoms of high altitude sickness. We had no means of contacting anyone except for one satellite phone in Batal. Just about then, a few locals from some place near Kaza came back from the lake and started to leave in their Maruti 800. The stupid guide, instead of sending the sick tourist  back to Batal in their car, hopped in himself and went away before we had the chance to say anything. 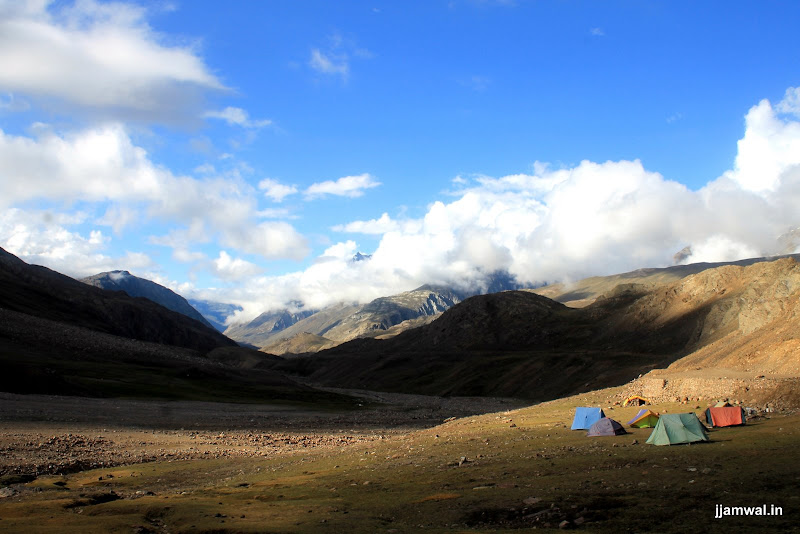 As we had no information of their location or means to help, we could only hope that the guide would be able to call up an ambulance. As I had already explore much of the area and didn’t have enough time to do anything else, I just stayed in the camp.  Jamaica is an interesting guy and it was fun listening to his stories. Did a bit of cleaning up of the camp site by picking up the trash. I wish the rules related to littering and environment protection were more strictly implemented. 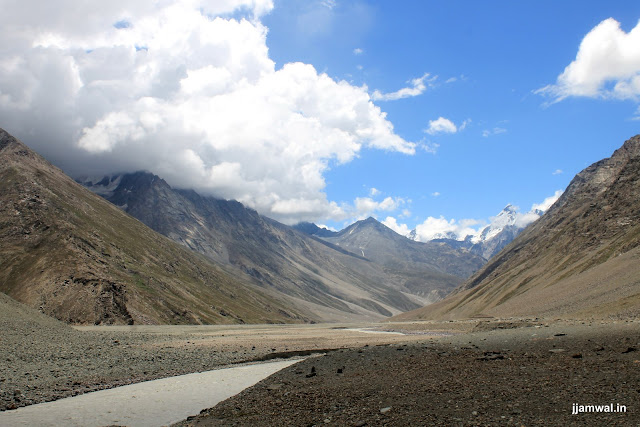 Batal
Anyhow, nothing really remarkable happened otherwise and I had dinner and packed up all of my stuff which was going back with me.  Waking up next morning, I was again tempted to go out to have a ‘little walk’ around the place but checked myself. No taxi, private car etc came up for a long time, so I just chatted with Jamaica and and some shepherds. After a while, 3 guys came up, one of them a guide from one of the camps down the road. Rest were staff from an ambulance service which the guide had called up. The driver was unable to negotiate the sharp curves and had left the ambulance back there to came up by foot. For record, you can dial 1608 to call for an ambulance there.
The guide came up riding pillion on a bike. Biker told us that one of the guys in his group had broken his leg near Batal and they were staying there waiting for a vehicle to Manali when the guide came  to call for ambulance. The guide went to his group to bring them, while the rest waited. They came up after a while and I was a bit surprised to see them. It was a group of 10-11 people and not one of them was looked below 35. The sick guy was easily 50. Although, they were using  porters and mules to carry their luggage,  their journey from Zanskar to Spiti was no mean feat. Many people consider it to be one of the most difficult treks.The sick guy was loaded on the bike and driven to the ambulance. As there was enough space, the driver graciously agreed to drop me in Batal. I gave away most of my medicines to Jamaica as I had little use for them and took my leave. I kept 2-3 pills of a few, just in case 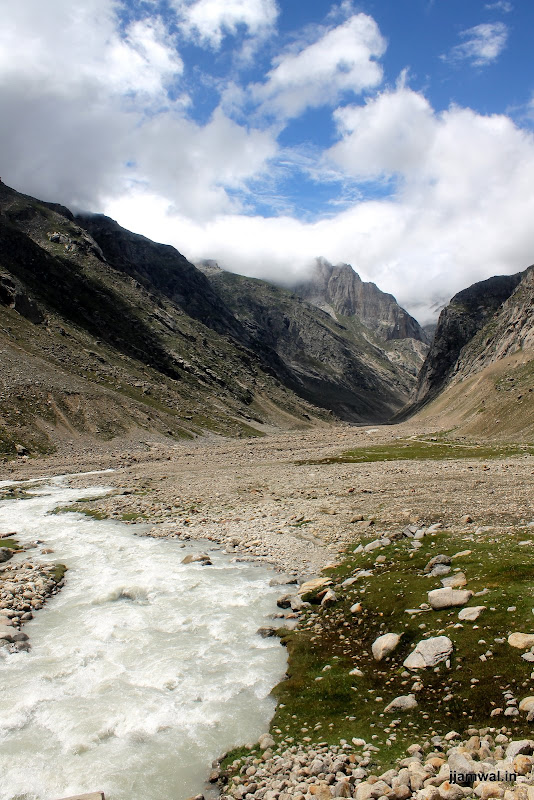 Near Chota Darraa
We walked to the ambulance and the sick tourist was given some first aid. He  didn’t speak English and most of the conversation was in gestures and signs. Only if the guide had brains to take him down to Batal with him the previous night, so much trouble could have been averted. But he seemed fine and no serious damage was done. I said goodbye to the lake and climbed in the front seat with driver. The road was rocky and difficult to drive , same as most places beyond Manali. At a point, I thought we were going too fast and I glanced at the speedometer. It read an insanely fast speed of 25 km per hour. Heh
The ambulance dropped us at Batal at 12 and left for Kaza. A bus was already waiting for the tourist group. It was full already, so I kept waiting for another one. As the road had just opened in Kaza, I was hopeful of getting a bus or taxi soon, but the vehicles going towards Manali were very few. I had lunch in Chandra dhaba and sat outside. There were quite a few vehicles coming from Manali going towards Kaza, so it was a busy place. Driver of the bus thought himself a bit of a smart alec and keept cracking tasteless jokes about age of sick tourist and how old people should stay at home, crows as big as chicken in mountains of Jammu etc . I got annoyed after a while and walked around the place clicking some photos.But there was hardly anything to see near the road.
After 2-3 hours, rest of the tourist group  reached Batal and they left on bus taking the injured biker with them. At around 4, I got sick of waiting and put away my rucksack to spend the night in dhaba. Even if any vehicle passed through, it couldn’t reach Manali before 11 in night. Last bus for Delhi left at around 9 – 10. Better to spend night in Batal than in another crappy hotel  in Manali. I picked up my camera and torch and left to explore the area beyond the hill adjacent to hill.
After walking around rather aimlessly for a while, I found the source of  ‘perennial tap’ in dhaba which provided water 24 hours non-stop. It was a small spring around a km from dhaba. They had laid down around 6-7 cm thick plastic pipes to transport the water back to the dwellings. Some holes, 1 meter deep were dug at regular intervals to keep an eye on pipe’s condition. Although, Chandra river  flows just beyond their dhaba, it’s water is not drinkable due to slit.
A ridge extended sideways for quite some distance beyond the spring and I started climbing it. A water stream which merges in to Chandra near the bridge in Batal flowed beyond it. It’s source was a glacier 3-4 km straight up the path on ridge which first merged with a mountain and then seemed to extend right up to the glacier. It was 2nd time in 2 days that I found myself right in sight of some place where I could easily walk to but couldn’t because of lack of time and related crap. Only if I had left sooner, I could have a reasonable chance of trekking right up to the glacier. It was getting dark really fast as dark clouds covered the sky and wind got a bit colder as if it was raining somewhere. 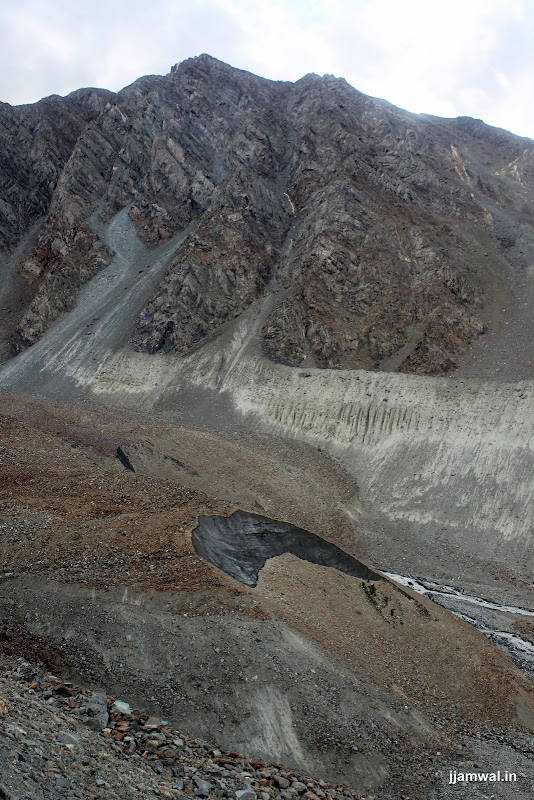 I decided to walk as far as possible till it got too dark or started raining heavily. Till now, I hadn’t paid much attention to critters on ground.  But this place for some reason was swarming with spiders up to 5-6 cm across. There were so few insects in the place and even less vegetation to support any significant numbers. Presence of so many full grown spiders in such a place was very surprising.  It was a bit difficult to take a picture as they hid fast behind stones whenever some particularly fast gust of wind came by. My camera battery was almost fully discharged by this time anyway. So there are not many pictures. 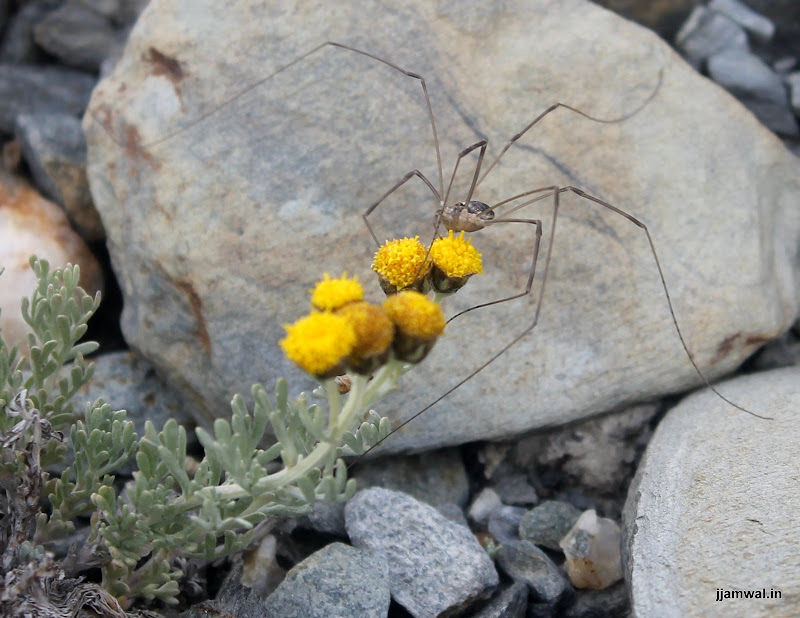 I still don’t believe that nectar, pollen are part of a healthy diet for a spider
I kept on walking till a few minutes past six when it started to drizzle. There was still a lot of distance left to the glacier, so I turned back. It was almost dark by the time I reached back to dhaba. A few minutes later, two bikes from Bangalore coming from Kaza side stopped by to ask for directions and decided to spend the night. They had started their journey from Shimla route and it was nice to compare notes and exchange  ideas. I realised for sure that biking is a completely different form of travel than what I like.  While we were having dinner, Chacha started generator to recharge his inverter batteries (for his satellite phone). I managed to get my camera battery charged too. We went to bed soon after. 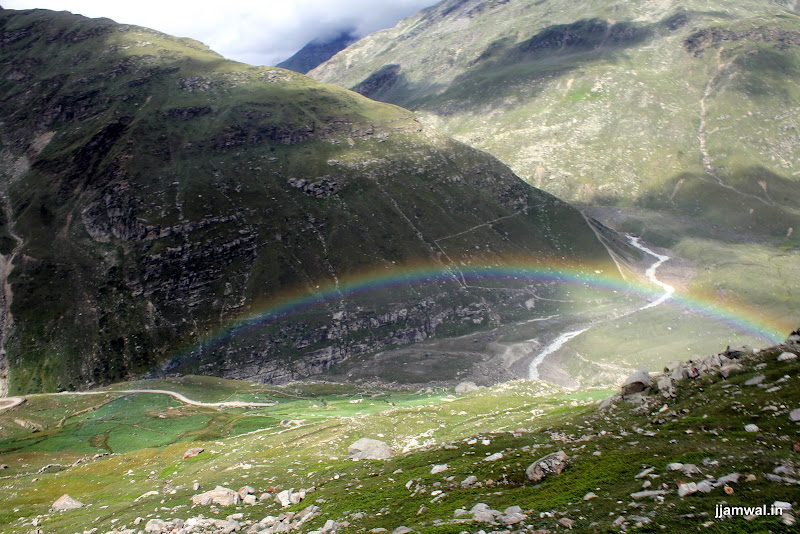 I woke up beforee 7 in morning to sound of trucks stopping and truckers going in to dhaba for a cup of tea. Those bikers had their breakfast, packed up and left soon after.  As I had my breakfast, I was tempted to go out walking again. But considering that the road had just been cleared, I decided to stay and wait for a vehicle. I got a lift in a Sumo taxi at around 11. The driver had stopped by the previous day too as he was transporting a group of foreigner tourists from Manali to somewhere near Kaza. As he was coming back empty, he had a 3 sullen looking Biharis who had missed the early morning bus. That bus had passed by about an hour earlier, completely jam packed. The driver upon noticing my camera asked me to stop wherever I feel liked to take pictures. He was fairly knowledgeable about the place and kept dropping tit-bits of information every now and then. One of the suspensions of the vehicle was damaged, so he claimed that  was not driving very fast. I doubted if it was possible to drive any faster on those roads. 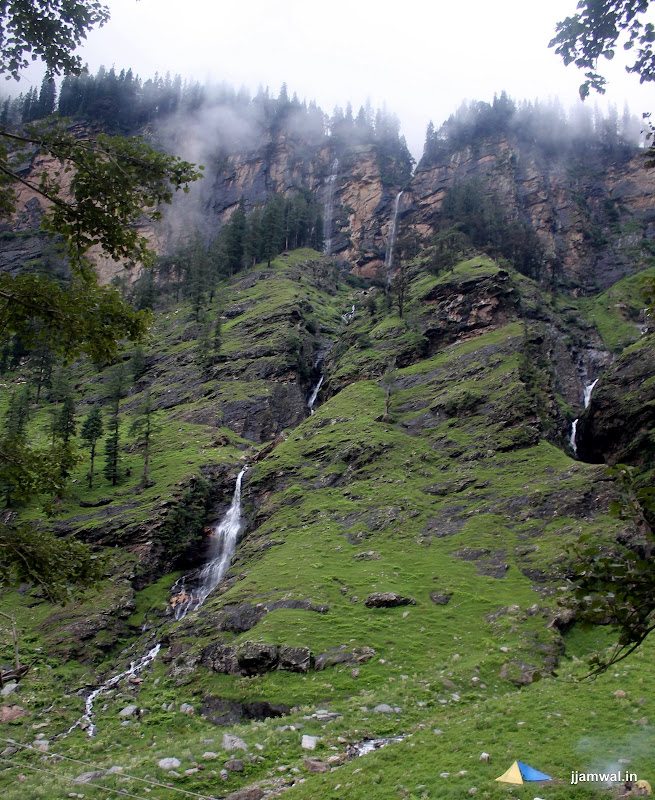 For perspective, that blue-yellow thing at bottom is a tent
We did stop in a number of places, sometimes him pointing out something which I had missed. He offered to stop and wait for me near Rohtang Pass, so that I could catch a glimpse of Beas Kund. But it was raining heavily and the place was literally covered with clouds. The visibility was less than 20 meters. We moved on but got stuck in jam due to bad road soon after. The road was nothing except a mud track  and we spent more than an hour crawling down from the pass till road got any better. Rohtang Pass was a disappointment anyway, full of shanty like shops, shitty dhabas and dumb tourists (mostly Indian) acting like fools. I can understand people posing for photos in silly dresses, sunglasses etc but what  angered me was filthiness of the place. An average Indian tourist is a  plague of any beautiful place. 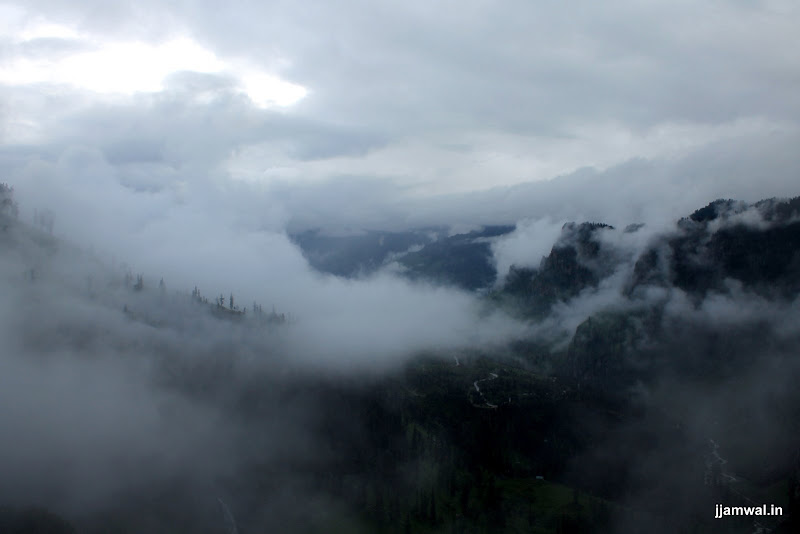 Rest of the drive to Manali was without any incident and the beautiful sights outside helped calmed me down. Finally I had the chance to see the part of Beas where it flows through deep gorges as described in अरे यायावर रहेगा याद . Couldn’t get out to explore but may be will do it someday. We reached Manali at around 7:30. All the Volvo buses had left and only Himachal SRTC buses were available. Bought one ticket for a bus leaving at 9:30. As I had quite a bit of time to pass, I walked to Old Manali and had dinner in a faux-Tibetan restaurant. Almost all of the staff had left for Pushkar due to off-season in Manali and beginning of tourist season there.  Tested ‘choclate momo’ for dessert. It was nothing to talk about.
The bus, when it left was mostly empty, but I couldn’t fit my rucksack in overhead luggage rack. A kind local suggested that I take one of empty row of seats. These buses are driven with  lights on inside switched on.   As I wanted to get a little bit of sleep, I put on my sunglasses, covered my eyes with my hat (yes, at night) and made myself as comfortable as possible. Managed to get a few winks of sleep, but the journey was long and bus reached Delhi past noon.
Back to the soul crushing grind of life in a big city.
Sigh. 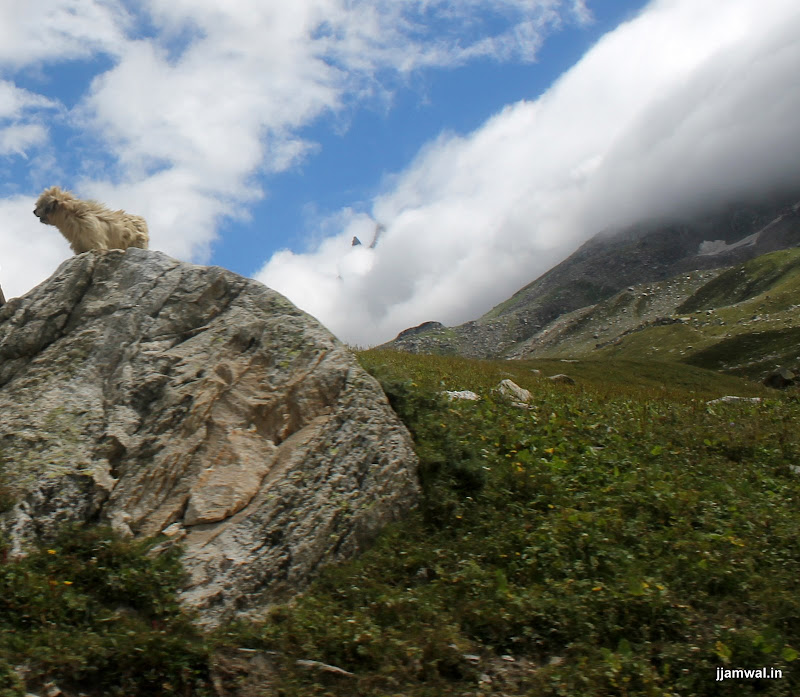 Not all those who wander are lost.  J.R.R.Tolkien