Skip to content
Next morning, I woke up to the sound of a car’s engine at around 7. Jamaica’s foreigner guests were leaving and he was going to see them off till Batal. By that time, I had made up my mind to go back to Delhi. I had forgotten to mention it before that some areas near Kaza had experienced heavy rainfall and landslides. Due to this, there were blockages on a few places along the route from Kunzum La to Kaza and beyond. After I had abandoned all hopes of visiting Samudri Taapoo, I wanted to visit Kibber for 2-3 days. But as it happened, the number of incoming vehicles slowed to a trickle and I was unable to get a taxi or lift to Kunzum La or Batal from where I could get somewhere else. 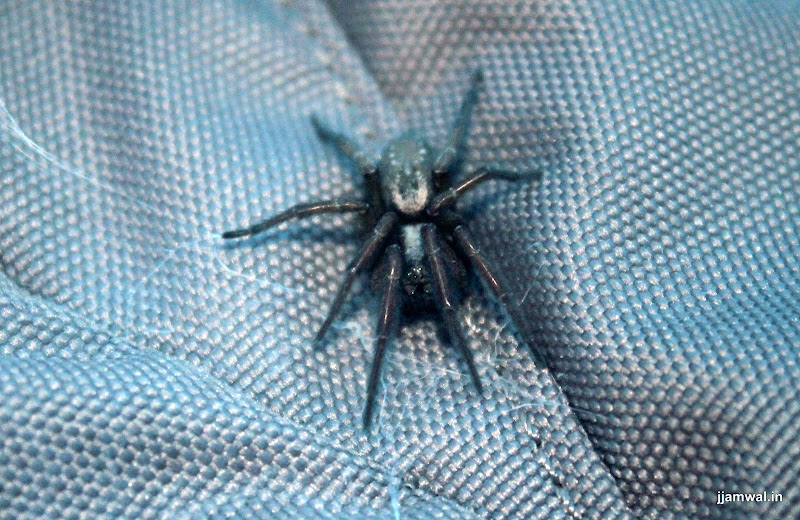 New camp mate
It didn’t matter much as I was enjoying my stay at Chandrataal a lot. The relative solitude was also a welcome incentive for my inertia. By that time, I had completely lost the concept of keeping date and time. It was a nice feeling, not to care about clock and calendar. Just roam around, eat, rest and walk around till it got too dark and sometimes even past that. After wandering around whole day, I was always tired to my bones, but loved every single moment.
When I got out of tent, I found out that Si too had packed up all of his belongings and was getting ready to leave. He had been staying for more than 3 weeks for his work and was going somewhere else. Lucky chap. It also meant that unless some other tourists arrived, I was the only one staying there. At least 2 out of 3 other camps down the road were also completely empty except for staff. As the day was probably my last of the stay, I wanted to take one last look at the lake. I put a little dry fruits in my pocket, picked up my camera and left for the lake. 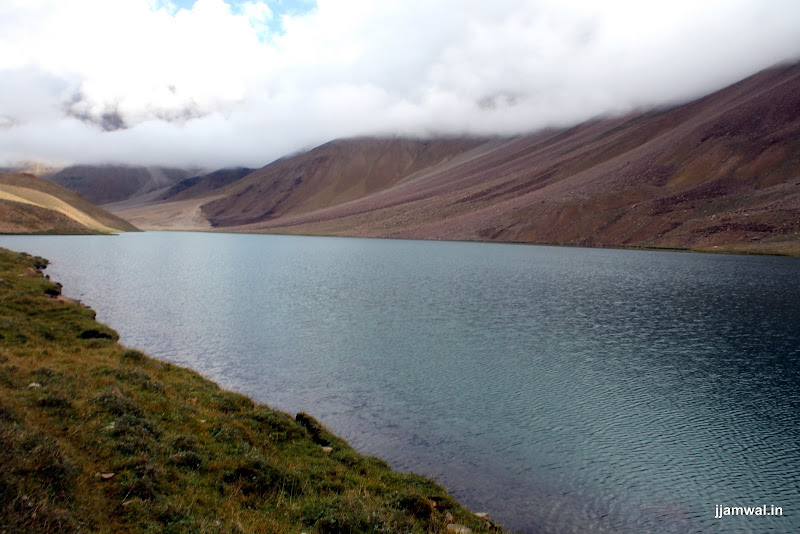 Chandrataal Lake
The wind I had talked about earlier had not started yet and the lake was completely tranquil. I sat down on a rock and took in the views for a while. I could hear the ducks quacking in some distance as well as some other birds including Himalayan Snowcock. But they are extremely shy and stay in higher reaches away from people. Gaddi dogs are a big danger to them. Si had seen a family of 2 adults and two young ones the previous day, but I was not so lucky. Hoping to catch a glimpse, I started walking around the lake, but I guess they moved away pretty fast and I could hear their calls no longer. But I did meet the duck family again. As I reached other end of the lake, I changed my mind about walking around the lake and decided to walk to the stream I had seen 2 days ago. Last time, it was too dark to see  anything in detail. This time, white clouds covered the adjoining mountain peaks. But the landscape was clear. I tried looking for the burrow, I had seen 3 days back, but couldn’t find it. Came up to the small but noisy stream while searching for the burrow and crossed it. The area was nothing but a path of dried out streams and and avalanches. The path was very rocky and difficult to walk for most part. Toughest thing was to walk down heap of stones 4-6 meters high and then climb another pile again. 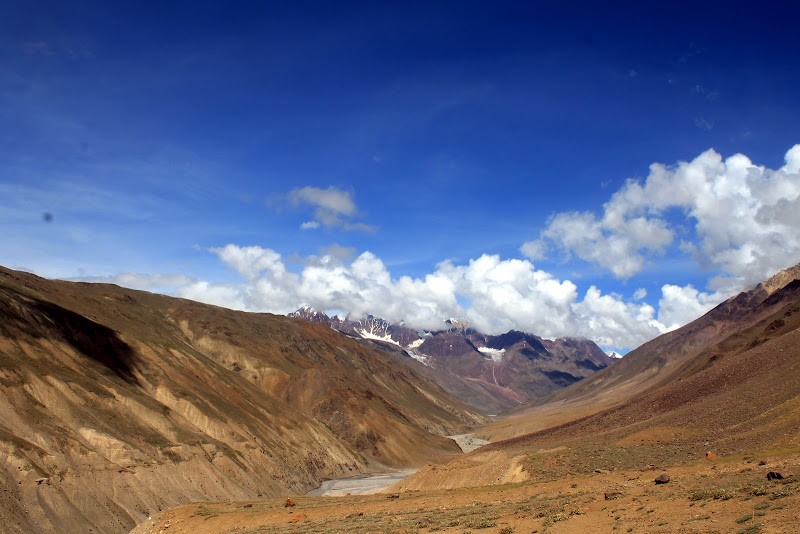 The other glacier in distance
Chandra river flowed to my left down the mountain and I kept following it to it’s source from above. After some time, I saw a Gaddi camp in distance and noticed someone walking towards me. I was surprised to see a Bihari in his teens. Is there any place in India where you can’t find one working ?

) No disrespect, just surprised to see a Bihari working for a Gaddi shepherd in Spiti. I asked him if there was any drinkable water source nearby. There was one very small stream, most of which was hidden under the rocks and he pointed it out. I thanked him and moved on. He asked me, ” आप यंहा क्या करने आयें हैं ? घूमने  ? (What are you here for ? Sight seeing ? )” I nodded yes and I think he must have shaken his head a little on the crazy tourist in middle of nowhere. Apparently, tourists are very rare on this trail.
I found the stream, drank some cold water and rested. When I had set out from the camp, I didn’t intend to come this far. I just wanted to see the lake once more, walk back and pack up my stuff and wait for a taxi. Somehow, that didn’t happen and I was 2-3 km away from lake following a trail which was barely there. With no food, water or sun glasses. Just a hat to protect from sun and a camera. In some of my walks, I used sandals instead of shoes and the exposed skin on my feet was severely sun burned. That’s when I realised that the itchy feeling on my nose, whenever I put my eye on camera’s viewfinder was a fairly deep sun burn. The expensive sun screen that I was using worked only if applied 3-4 times a day. I guess, one has to stay indoors for optimal results too. By this time, most of the clouds had dissipated and sun was shining in it’s full glory. As I was already looking like a badly maintained brown leather bag, I just shrugged it off. What more could another day in sun could do ! 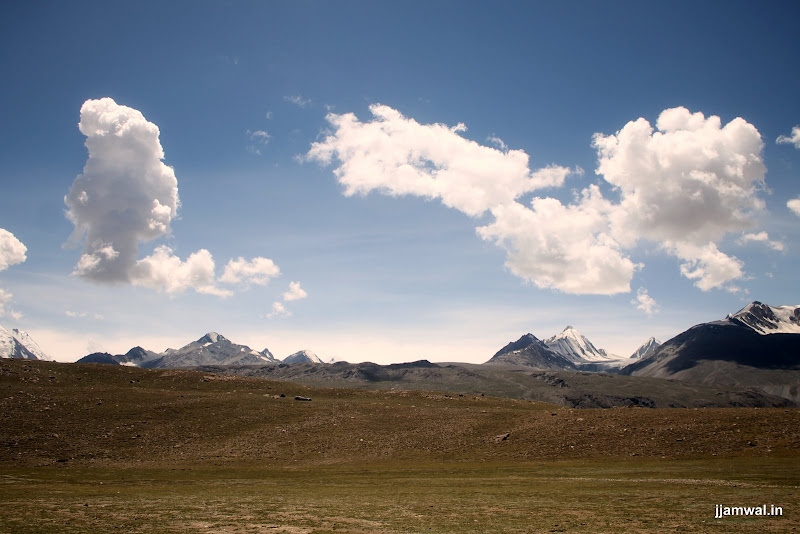 I kept on walking and reached bottom of the hill where I had seen the Gaddi camp. A shepherd was getting his flock out to graze. I considered walking up to him but my path bypassed his camp and it was a rather steep climb. Having to deal with 3-4 menacing dogs wasn’t an appealing idea either.
At some distane, I came across a empty stone hut which looked like it hadn’t been occupied for years. By this time, I was thirsty, hungry and fairly tired. But the sight of glacier kept me going. It was one of the sources of Chandra river, 2nd one being Samudri Taapoo. The former would have taken at least 4-5 hours of walking, but most of it was on easier terrain and no river to cross. As I got closer to the glacier, amount and flow of water in the river kept decreasing. It even looked possible to pass it on foot in some places. But I didn’t go that far. After a while I got really thirsty and there was no water source nearby. It was hot and I could see mirages shimmering over hot rocks. As I had no intention to walk up to the glacier in first place, I sat down on a ledge and rested.  As far as I could see, there was no trace of any human being. Even Gaddis rarely came that far and there were no stone huts beyond that point. One interesting feature I saw were *some long rocks, 3-6 meters high, standing up on slope near the river. I don’t know how to properly explain this, just take a look at the picture. 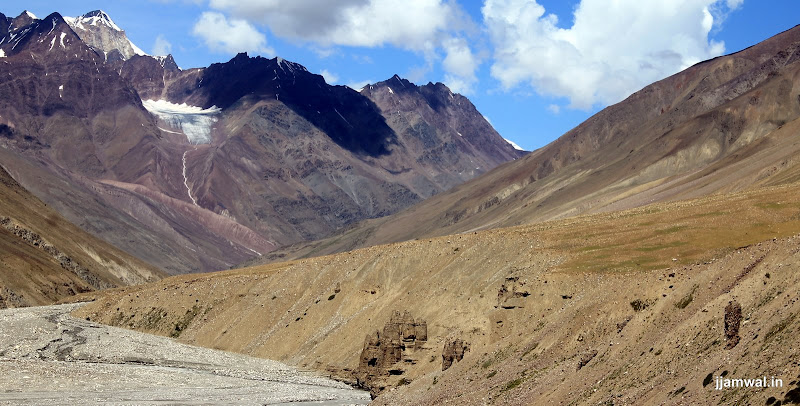 Some crazy erosion
After resting for some time, I started walking back towards my camp. The shepherd I had seen earlier in his camp was now on a nearby mountain with his flock. It was probably his last day in that area too as they were packing up to leave. I came up to the lake after what seemed like hours to find Pradhan’s sheep blocking the trail but he was not in sight. They scattered as soon as I reached within touching distance. The campsite was empty when I reached there and I had 1 chocolate and some dry fruit for lunch . It was nearly 3 pm and I had been walking for almost 8 hours. Sunny was probably sleeping or somewhere else and I had given away all of my MRE packs the previous night No vehicle except for a single Sumo from Manali side had came that morning. Si had probably hitched a lift in that. Even if some vehicle/taxi came up at that point, it was a fools errand to packup everything and hitch a ride. So, I crawled in to my tent and slept on the mat. It was too hot to use sleeping bag.
More in next post 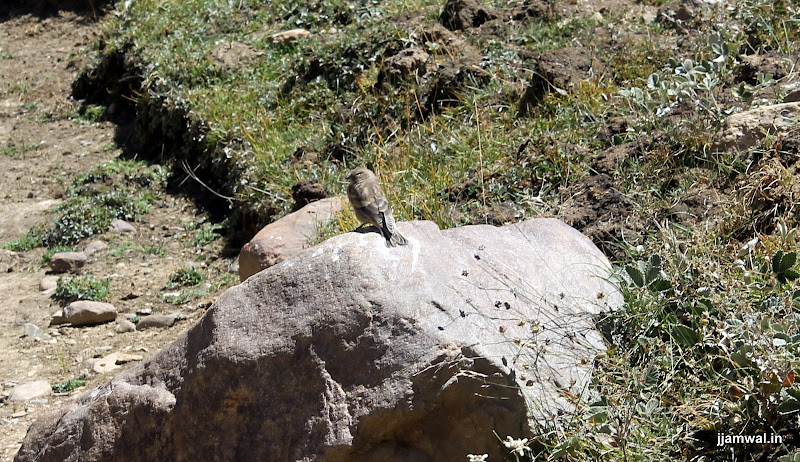