Next morning after breakfast, we put some snacks in our backpacks and started walking towards Chandrataal lake. We took the trail route through mountains rather than road. It was uphill walk for a while, but nothing too difficult. Again the landmarks I remembered from my last visit like bunch of black stones, dried out seasonal ponds were all there. Interestingly we also found out some ponds which still had not dried out. Instead of straight walk to lake, I took a detour to show Samudri Tapu to wifey and ACB. They were not too thrilled by the extra walk. Walking distance via road is about 3 km. Our one way hike was about 4.5 km, but a lot more interesting, to me at least. 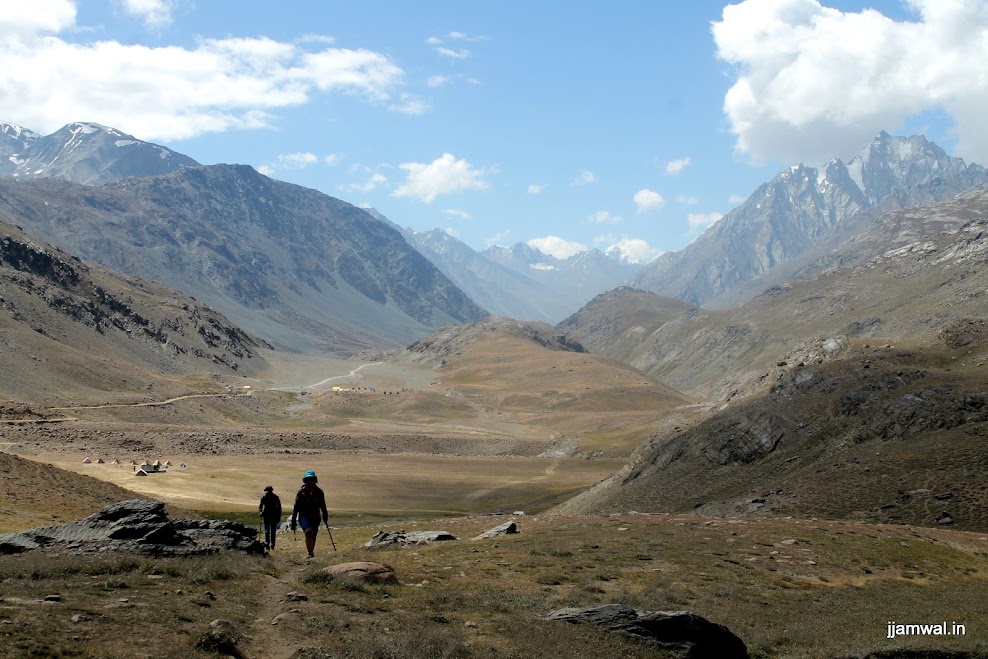 The trail we followed took us past the usual route and we came across the lake from it’s western flank. The usual poses and photography ensued. We walked along and settled down for some rest along it’s northern side. A few local tourists were already there having some kind of picnic. After a while, Jamaica too came along with a couple of his guests. The two French girls had completed the circuit around lake before us and came around to rest. I grew restless sitting in same place and annoyed by noisy tourists and wanted to walk around the lake. Wifey tagged along while ACB just wanted to relax, meditate and in his words “ask myself some questions” . So me and wifey left him there with Jamaica and other tourists and walked along the lake. I had done it 3-4 times last time I was there and it felt good to do it again. 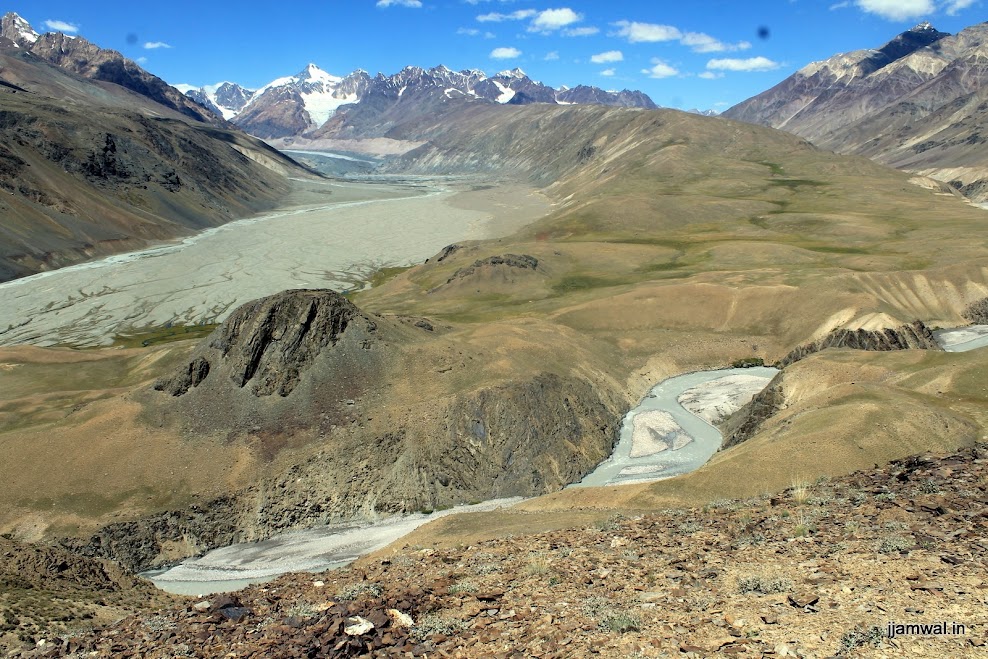 Upon reaching the other side, we rested there for a while and had some snacks. That side was deserted and we could see only 1-2 tourists walking towards our general direction. After enjoying the views for a while, we started our walk back which went on without any incident. I was hoping to spot the duck family I saw last time or some other birds or animals, but there was nothing. When we reached the other side, ACB, Jamaica and the French girl were all gone. 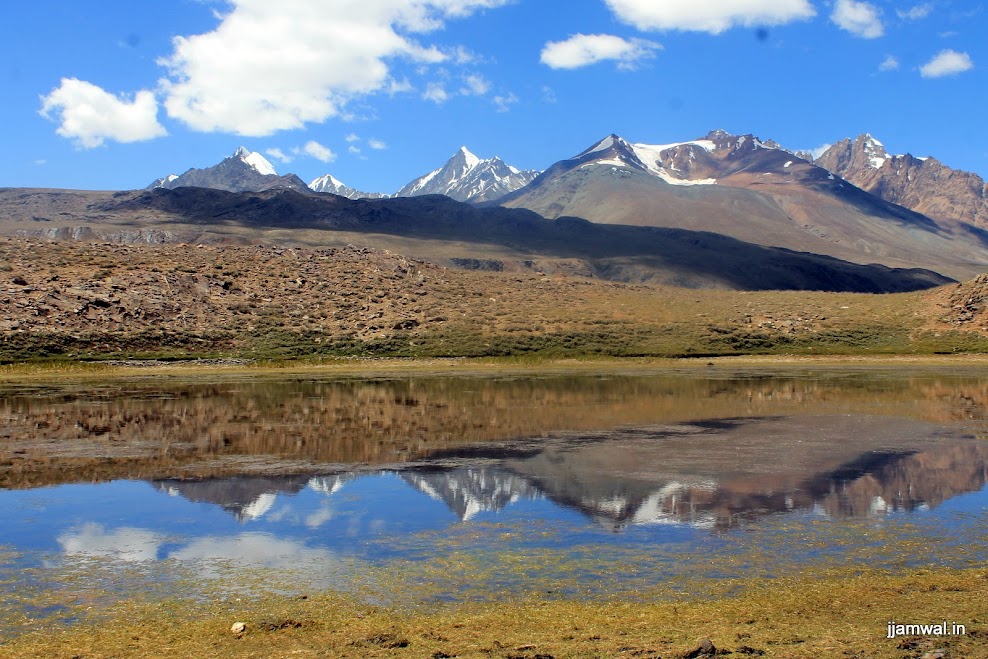 One pond we found on the way

There was not much to see or do there for day for us, so we started the 3 km walk back to camp via road. Wifey just put her foot down against taking the “off beat path” back. In a way, it was in line with my principle of never taking the same path back. hehe. On the flip side, that “road” is just a dirt track and coughs up copious amount of dust every time a vehicle drives by. So we just covered our noses with bandanas and started the long march. Combined with tiredness from previous day, not being used to this altitude and the walk that day, we started feeling tired pretty quickly. After we had covered about 2 km, we saw a pickup truck coming from lake’s direction and signaled it to stop. It was being driven by a worker from one of the workers from another camp. Only empty place where we could get in was back of the pickup truck. It had 2 tires and some junk lying around. Not an ideal situation, but still better than nothing. 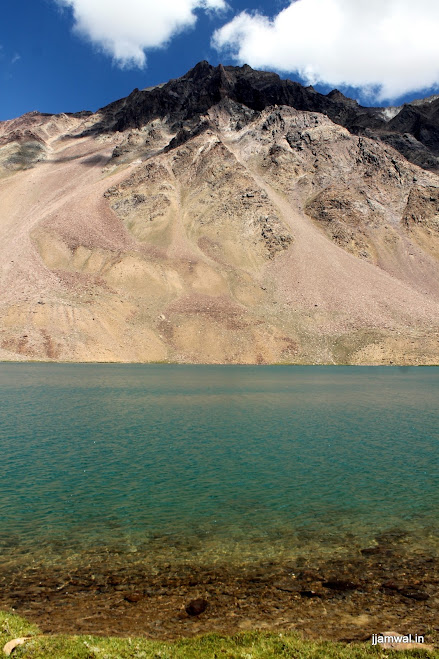 It was just about half a km ride or so we thought. The driver seemed to be on some kind of kamikaze mood and drove likewise taking shortcuts every where. Imagine taking shortcuts on a mountain road.  We kept on bouncing around in the back and got covered with a thick layer of dust. Once it finally stopped, we got out on wobbly legs and covered in dust from head to toe. After mumbling thanks for the ride we walked towards our tent to shake it off. I had a mild headache early on since morning and this ride had turned in to a thumping one. 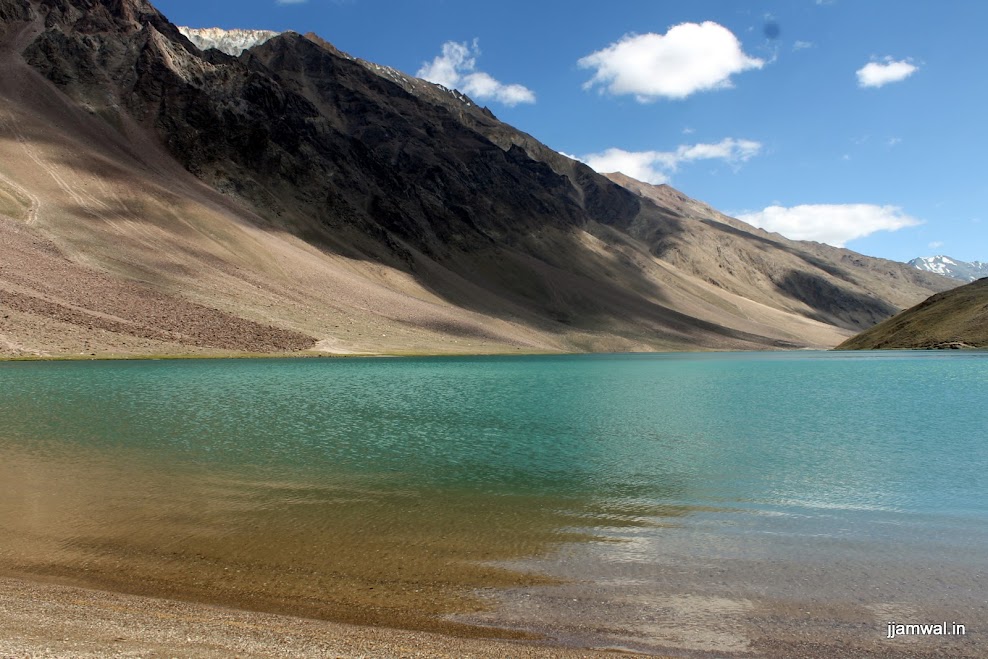 View of Chandrataal Lake from other side

When we reached the camp Jamaica and ACB were both busy talking to some other guests in camp site and wanted me to join. I didn’t feel like talking to anyone and just rested after cleaning myself up as much as possible.

Later on, I asked Jamaica about possibility of doing the trek to Samudri Tapu and water level in the river. He flat out ruled out any possibility saying that the water level was too high and some of the trekkers who follow the same route for a while for some other trek had to turn back. The rope route option was dependent on some shepherd passing by, but the chances were pretty slim. I decided to wait for a day more to see if the crossing would be possible and asked Jamaica for some thing to do in the meanwhile. He suggested that he could ask one of his workers to put up a tents for us near the lake on the southern side. 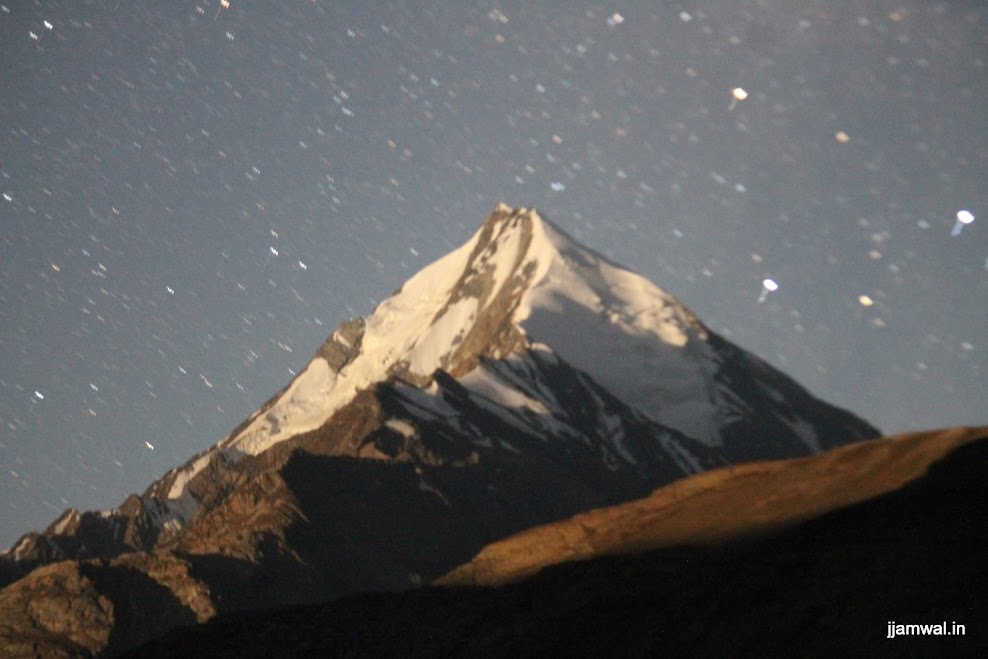 I felt that it was a great idea as if there was some chance of water level receding, I could start the trek from there instead from campsite 5+ km away. If I remember correctly, both ACB and wifey and “opted” out of trek to Samudri Tapu when we were at the lake. A small setback, but I was really adamant on doing it one way or the other. Jamaica was leaving next morning for Kaza and had plans to come back in evening. So he asked one of his helpers, Dorjee to make arrangements. We spent the evening in kitchen tent drinking chai, talking to tourists from all over and had a late dinner. After a while when it got dark, I got out to do some star gazing. The sight of Milky Way is a sight to behold, specially at this altitude. There are hundreds of stars in every inch of night sky and is a great place to look for shooting stars, satellites, planets and almost any other thing of interest in the night sky. 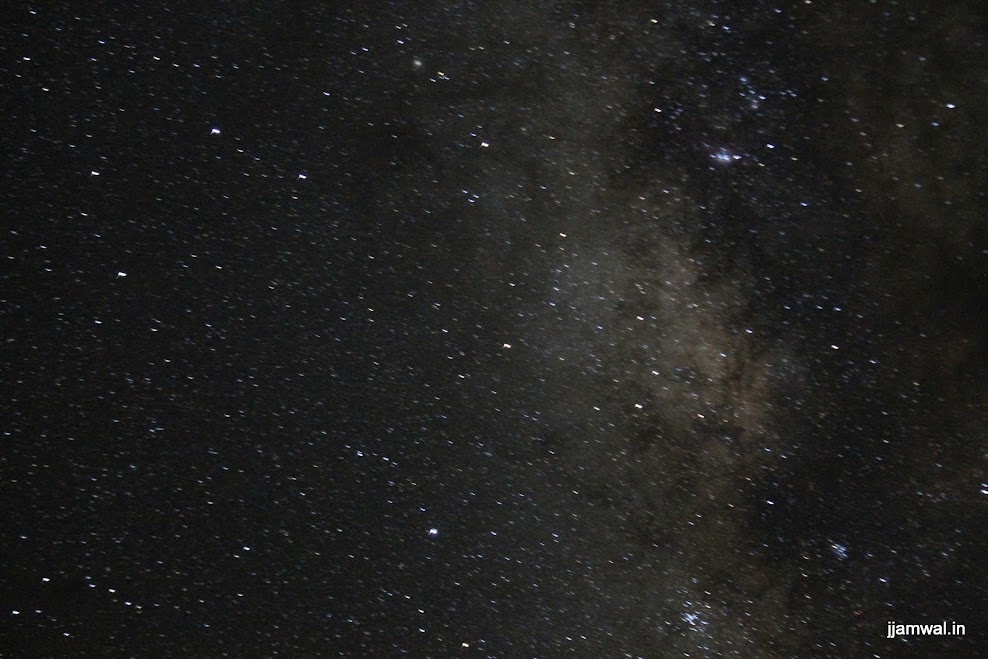 While others were inside, I spent some time taking pictures of night sky. Unfortunately, almost every single picture I took there turned out crap as I ignored to turn off image stabilisation on lens. The pictures looked OK on camera screen but a lot more blurry when zoomed which I checked out much later. I was carrying one extra battery but wanted to conserve as much as possible, so didn’t spend much time checking quality of pictures. I don’t exactly know what happened, but my older battery ran out that night without any warning, probably due to too many long exposure shots. Next day I also realised that there were two dust particles on camera’s sensor It screwed up a majority of pictures I took. As I was not carrying a blower, most of my pictures from this trip are just shit quality.

I never ever imagined that I’ll ever wake up before sunrise without an alarm. That day was no exception. Woke up a few minutes before 6, rested and refreshed. Sleeping in a sleeping bag inside a tent is not uncomfortable after all. Got out of the bag and then the cold hit. The difference between the day and night temperatures must be 25 degrees or more. In simple words, it was cold. I hurriedly put on my jacket and stepped out of the tent. The view outside was stunning, to say the least. Grey, white clouds were  idly strolling between mountains peaks giving the impression that the mountains were smoking.

Jamaica, his helper Sunny, Si and 2 other tourists  were already outside drinking tea. I asked for a glass of hot milk and mixed some drinking chocolate that I had brought with me. Combined with the scenic mountains in front of me, I couldn’t have asked for more. After finishing  chocolate milk, I picked up my camera and left for Chandrataal (Chandertaal) lake. But first, I want to make somethings clear:

At just a few minutes past 3:30 am, I woke up and started getting ready. Water in shower was very cold at that time. Felt strange wishing for hot water in middle of August. After getting ready, I checked out of the hotel and reached the  taxi stand. Tenzin, the driver secured my bag on roof of his Tata Sumo by a rope along with luggage of other passengers and started driving by 4:15.  Apart from me, there were 3 Israeli tourists and 4 locals. A local 3 day long festival was just starting that day in Kaza and some of the locals were going there to attend it. I took a seat in back and sat down hoping to doze a little.

But that hope proved to be futile. For 30-40 minutes or so, road was well paved but after that it got bad, helped in no less deal by the recent rains. It was full of rubble and stones due to big and small landslides and the ride was not exactly smooth.  I even started to get a little motion-sickness but it wasn’t too bad.  After 5:30 am, sun started to come up and one could enjoy the sights. The scenery was beautiful beyond words. We were traveling on mountains and could see dense clouds covering the valley below. Going by the view, we could’ve been flying in an airplane. By that time, road had been completely  replaced by a dirt track with mud up to 10-15 cm deep, sometimes even more. Just a few km before Rohtang pass, we got stuck in a jam, but fortunately it didn’t last long.

We stopped in a place called Gramphu Continue reading