After waking up early next morning, me and wifey  got our stuff ready for the journey. Taking a bath in Himachal demands that you use hot water. Wishing for a hot shower in May is not what I am used to. A normal shower in Delhi is almost always a hot shower these months and in Himachal, we had to use geysers.  After getting ready, we said good bye to the family and started our journey to Rajgarh. Our plan was to drive through Chail, stop at Kali Ka Tibba and reach Rajgarh for night stay. The road took us through some interesting places with just trees around with no human settlement for a long distance. It was a relief from the hot and crowded concrete jungles of Solan, Shimla and nearby areas. 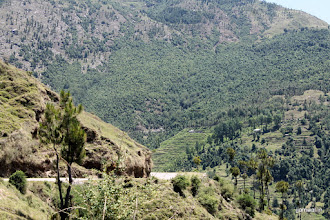 Our first stop was at Kali ka Tibba, an important temple for the people in the region. I am not religious and places of worship aren’t generally high on my list. To top that, Himachal and most of India is full of useless places of worship all over. Places like this Kali Ka Tibba (and the temple we visited next and countless others ) used to be quiet,scenic spots where religious folk could meditate or worship in peace away from the crowds. Idiotic religiosity of people however means that these places need to be changed to something gaudy, flashy and more like a commercial enterprise rather than a place where spiritual people can find a less distracting sanctuary. So they will cut all the trees, level the place, cover it with concrete, erect huge buildings and call it a peaceful place of worship. If this is not one of the biggest example of idiocy, I don’t know what is.   Even now, one could have guessed what a majestic place this used to be before it was all covered with marble and turned in to a temple.
To be fair, the temple was clean and unlike the greedy priests that one sees in places like Vrindavan, Haridwar, we were not forced to “donate” money, though wifey did give away more than what I thought was fair.  Unlike non-Hindu places of worship, money donated to Hindu temples goes to government which then uses it to finance “secular” measures like Haj subsidy. So, I am always in two minds here. 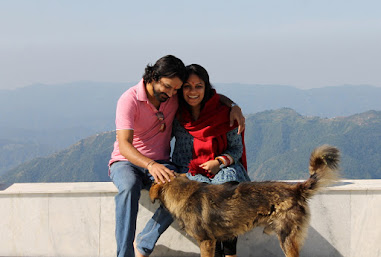 Views of the nearby hills was good though and quiet except for an occasional ill maintained motorcycle coughing down the road somewhere nearby. The only source of any sound were large number of birds, bees,a few other insects and strong wind. The butterflies in this region are mostly the type shown here. Saw them all over the region. Mcleodganj had a different one with yellow wings. Seems like each region has one special one in large numbers.
We had breakfast of some sandwiches in the parking area then started driving to our next destination Rajgarh. The drive was uneventful and we reached our guest house Tourist Inn run by HPTDC by noon. Rajgarh is just another small hilly town with 100 or so houses, a nondescript market  and too much construction going on. The guest house itself was nothing special but had huge rooms and bathrooms. Some places I know have crammed 4 rooms in to same floor area. The staff was courteous, friendly and efficient.  Call me a skeptic, but I was pleasantly surprised. We had some tea and pakodas as it was too early for lunch and rested for a while. Our plan was to visit a jam factory in Bhuira to see if it could be included in our offered tour plans.  It is a small plant staffed by local villagers and they make very good products. More on this in a later post. 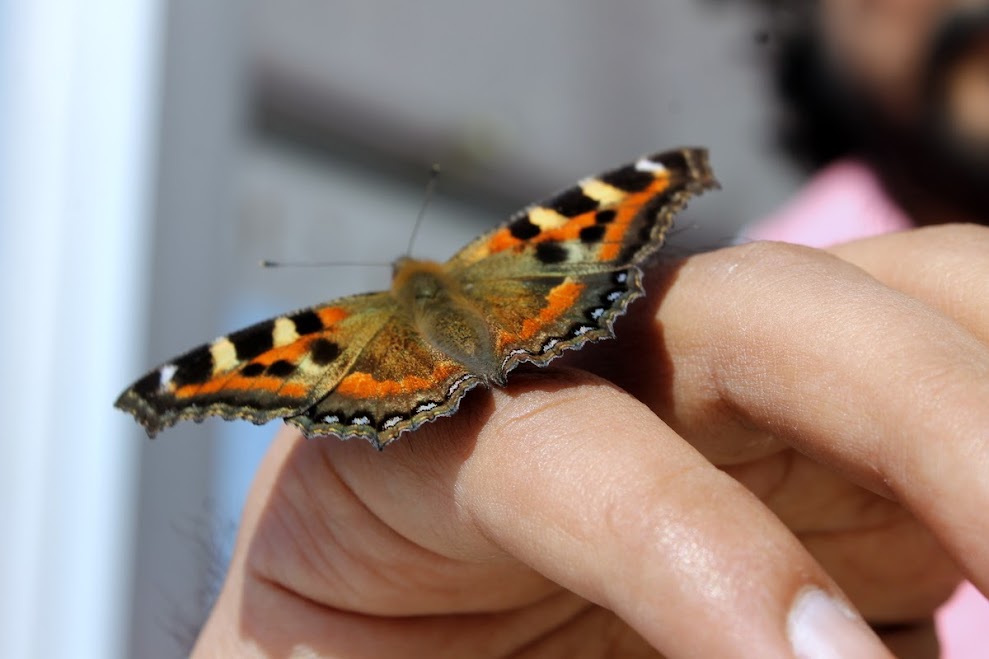 But at that time, I didn’t feel like taxing my brain too much and just went on a walk. Our guesthouse was near the edge of the town and we took the road up ahead. There was not much to see there and it mostly felt like a waste of time. Wifey made it clear very soon, but we kept on walking for a while. Finally after walking on the road covered with potholes for about 50 minutes, I called driver to bring the car to take us back. Just then, we reached a small comparatively flat ridge area which had two mobile phone towers near road and pine trees just behind. Someone was harvesting resin from the trees and all of them were marked. Curious, we walked in to the wooded areas and found that almost all the trees were like that. There were some birds high up in the branches, but I was unable to see them properly or take their pictures. 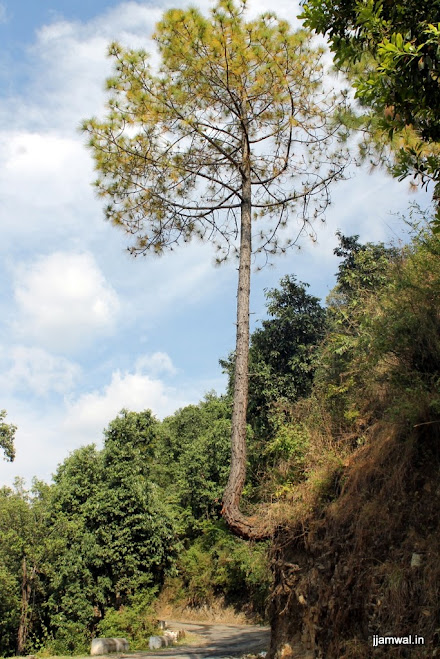 We were hungry by this time and asked the driver to take us to Rajgarh market for a late lunch. There were 4-5 eating joints, each one marked “vaishno” vegetarian or non-vegetarian marked as meat dhaba or something like that. We went in to a small place run by a woman and asked for a plate of rice, daal, chane and momos (dumplings). The food was OK to eat and very cheap. I walked in to a sweet shop to buy something to eat as dessert and spotted something like a brownish laddoo. But the shopkeeper refused to sell it saying that the batch was stale and not good enough to eat.
We still got some ghujia and laddoos from another sweet shop and went back to our room.
There wasn’t much to see or do after this and we just watched some TV and went to sleep soon after. Next day was not as boring.