Next morning we just lazed around the campsite. All the guests from previous night were gone and more were expected to arrive only after noon. We asked Dorjee to prepare some pulao to carry with us for dinner. In the meanwhile, we packed up some essentials to take with us to the campsite. At noon, the driver who had brought us from Manali to Kunzum La, arrived with 2 Indian women who stopped at campsite for tea. Early on we were all expecting to hike to the lake carrying all our stuff, but the driver offered a lift till the lake. So we put most of our stuff in the car. Wifey, ACB and Dorjee went with it while me, Emili and Andrea preferred to walk. 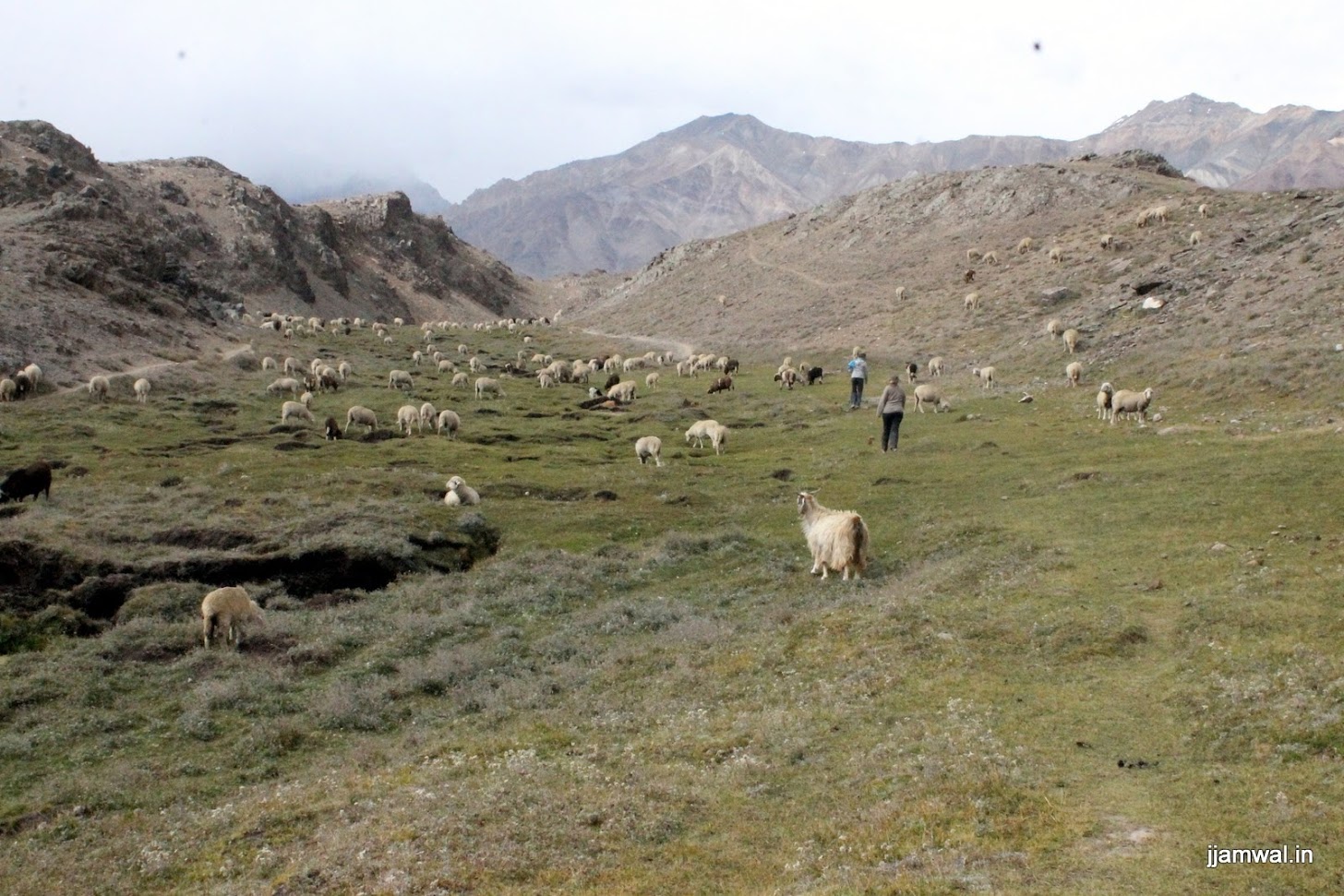 Once the car left, we started walking the same way as previous day. For a while, I was walking in front. But Andrea soon paced ahead and Emili after her. Within 15-20 minutes they were far ahead of me while I was huffing and puffing my way through. It was only in the evening that I learnt that the 2 lived and worked in French Alps. While the mountain range is not as high, these women were French pahadins and I could never hope to keep up with them They stopped a few times to let me catch up, but I realised pretty soon that trying to keep up with them will be stupidity. Once we reached near end of the trail, Andrea started walking even faster. Emili told me that she is annoyed by the wind. I just stayed behind and followed the trail. No reason to show any annoyance against the wind. 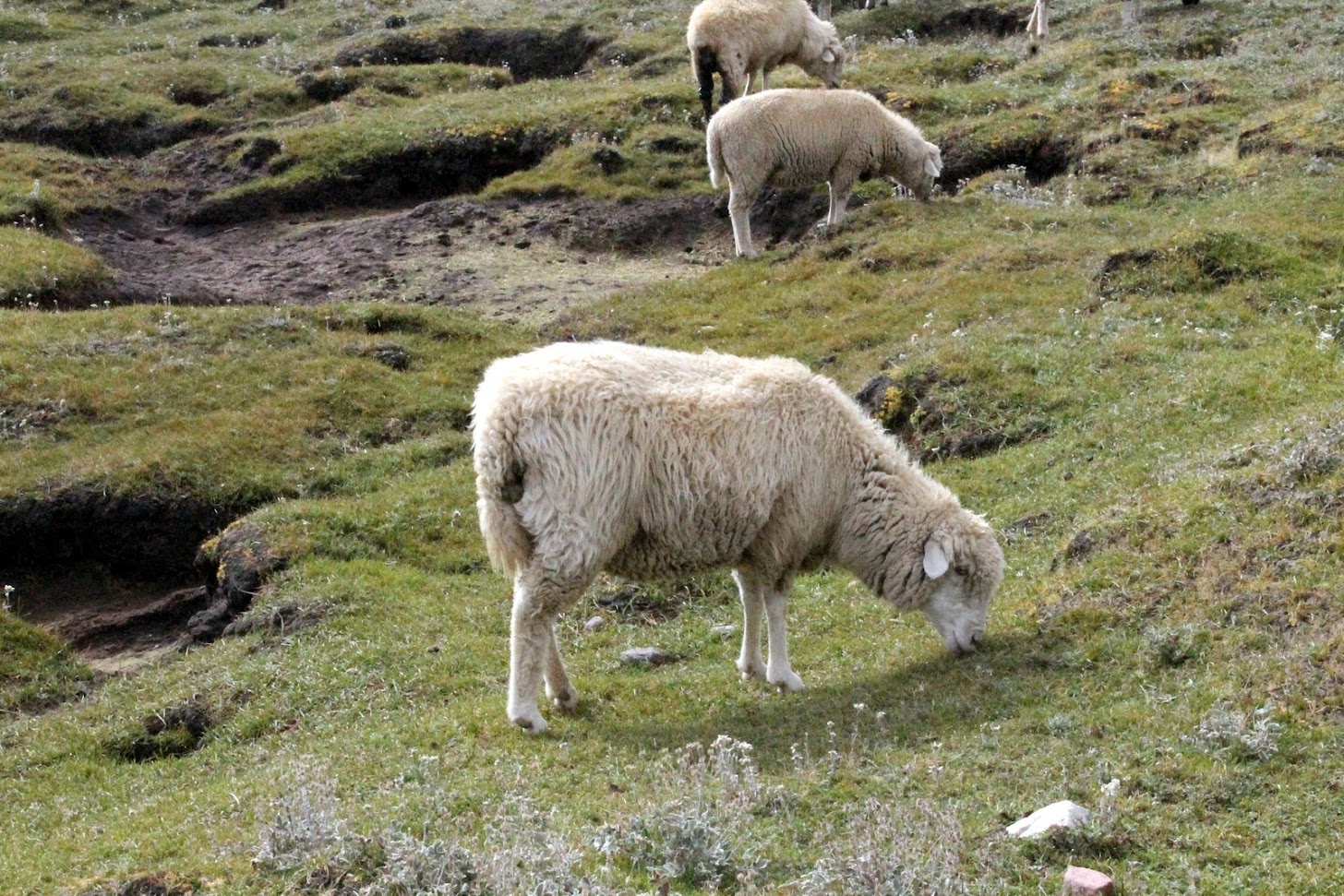 I think that they must have reached end of the lake at least 20-25 minutes before me. But it was my turn to get annoyed when I reached there. The tents were put up exactly in that place I had asked Dorjee not to use. From my last time, I knew that camping is not allowed within a km of lake. Later on found out that the limit was increased to 2 km. Anyhow, the tents were put up just about 250 m from the lake and very near some mud pits. I had asked him to put up the camp further down the empty ground where the earth would be drier and we wouldn’t be breaking any rules. I really hate people who act like an ass in such places and in this case I was doing the same thing as them.

But packing up tents and putting them up again was not really an option at that time. Wifey and ACB seemed really tired and any such suggestion would have meant them asking me to do the whole chore myself, if at all. Everyone had their stuff out by the time I had reached and packing up everything again to move would have taken another 30-35 minutes which we didn’t have. Just at that moment, ACB realised that he had left some of his essential stuff back. Dorjee immediately offered to bring that back if ACB agreed to meet him half way. The French girls seemed only too happy to have a chance to walk some more. So Dorjee scampered off to main campsite while ACB and French girls left after him to meet him half way on his return.

All this happened within 8-10 minutes of my arrival before I had the chance to say anything. I just watched them leave and crawled in to the tent to rest for a while. But it was getting dark quickly and I still had some work to do. As mentioned earlier, the trek to Samudri Tapu depended a great deal on water level in the river. So me and wifey got out of tent and started walking across the ground. On the way, I say a lone yak staring at us from a hill. The animal kept staring without bothering to graze for t least 10-12 minutes. I wondered if it was alone, but found out that it was part of a herd later. The mountain streams and waterfalls I remembered from my last trip were still there but the water was not as muddy as the last time. About that time, we felt some rain drops and a few minutes later snow or was it ice ? But it was only for a minute or so. 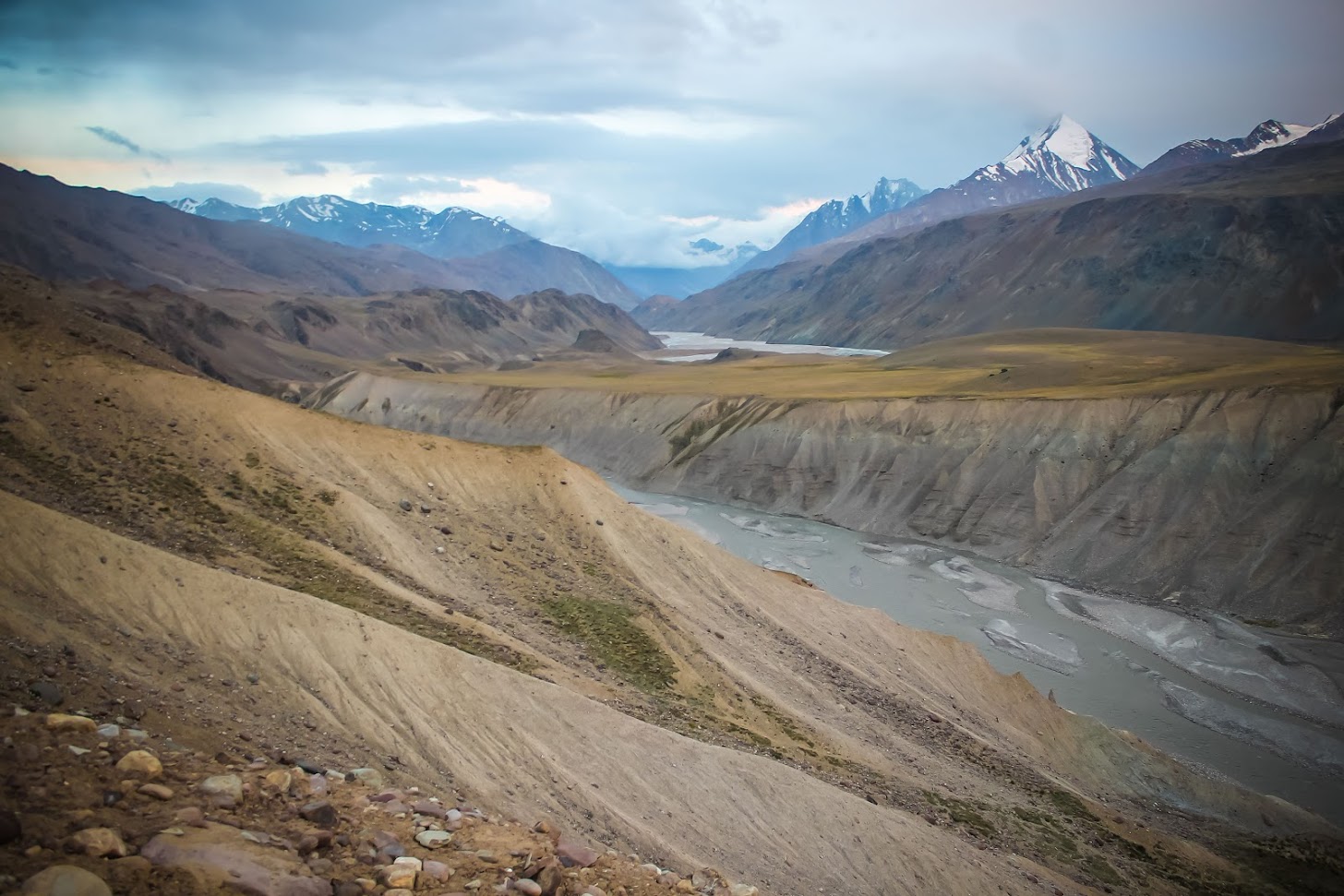 View from a top of the hill

A swift wind was blowing and we felt every bit of exposed skin getting chilled. We crossed one stream after which it started getting a bit dark. We climbed on ridge at the end of mountain and admired the view. In distance I could see the point I had walked to during last time. The river was about 700-800 meters below and looked not that bad. I still decided to wait till next morning to make up my mind.

The sun had dropped behind mountains at that time and it was getting dark really quick, so we started to walk back to our campsite. From a distance, we could see lights in one of the tents, meaning ACB and French girls were back. But on the way, we noticed that the Yak herd we had seen earlier on the hill was directly in our path. For a moment, I was in two minds whether to take a detour or go through them. We chose latter as they didn’t look threatening. Some of them looked at us in curiosity but mostly kept on grazing. Only that black and white one kept staring again.

Once back at campsite, we found ACB and French girls playing some card games. We were all feeling hungry by the time and heated up the pulao that Dorjee had packed for us. It got cold within 2 minutes of heating due to the cold wind but everyone said that it was fine. After dinner, wifey joined them in their card games while I tried to get some shots of night sky. But my second battery too unexpectedly ran out. Now we had only wifey’s Nikon Coolpix, but it doesn’t have any manual mode that I know of and is more or less useless for night photography. 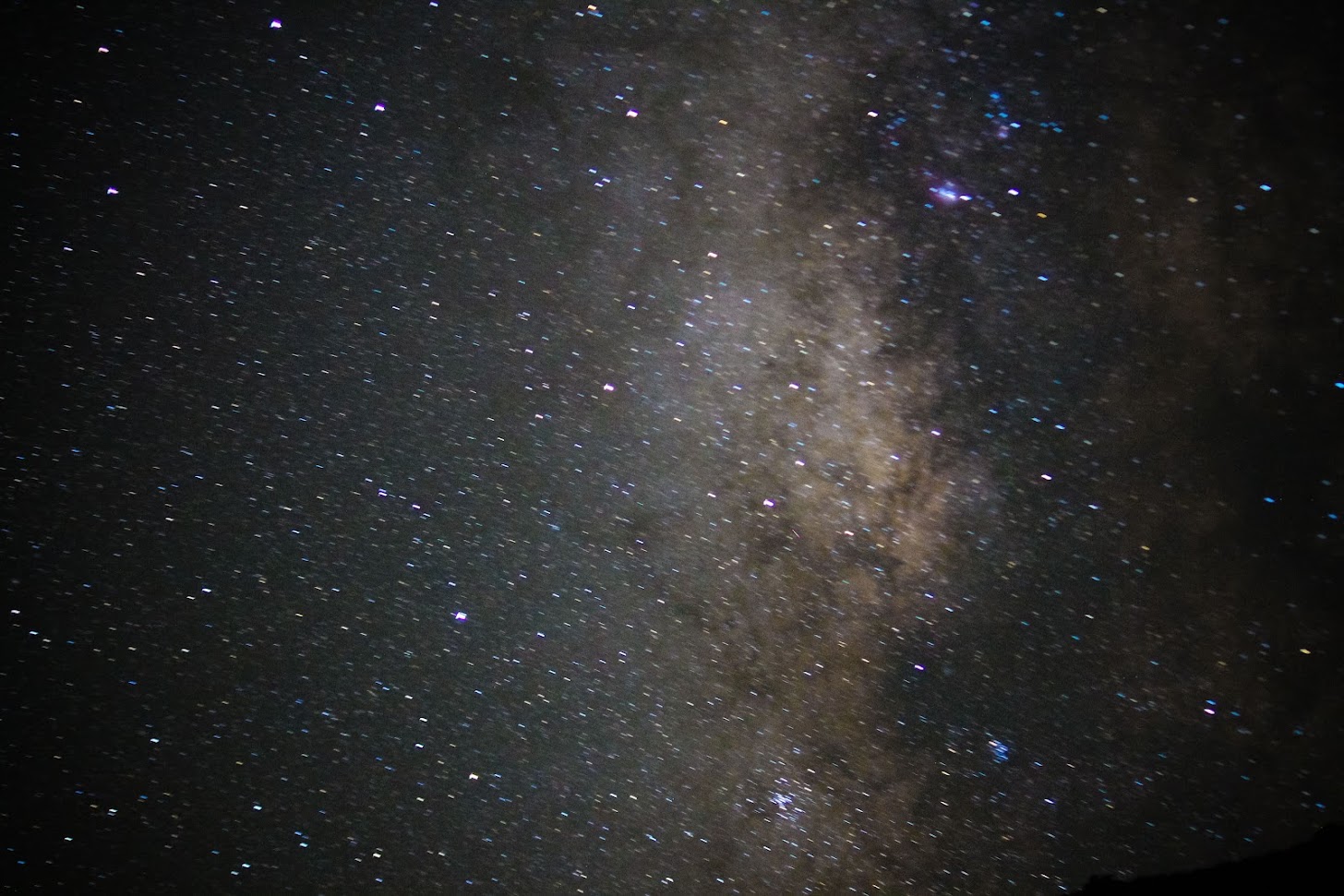 During this time, the sky was lit up by lightning numerous times just beyond the valley we were in even though sky overhead was mostly clear. Not a good sign at all. During this time, the girls were star gazing and ACB was probably meditating or asking himself some questions. After some time, they started their card games in one of the tents again, I waited outside for a while for moonrise, but it was behind the nearby mountains and wouldn’t have become visible for 3-4 hours more. The wind was getting too cold and strong too. So once my camera battery ran out, I put camera back in tent and watched their game before we all went to sleep.

Sleep, which neither one of us had enough of during the night. We all had one sleeping bag, fleece lining and a ground mat which was not adequate for the night at all. As mentioned earlier, the ground was damp which didn’t help the matters. A very cold and strong wind was blowing made even colder by the precipitation happening nearby. We were sleeping fully dressed in our clothes which we wore during the day and still felt cold. We all slept for 10-15 minutes stretches interspersed by waking up too often all through night. Early morning just after first light, I was tossing and turning when I heard a quack followed by another a few seconds later. 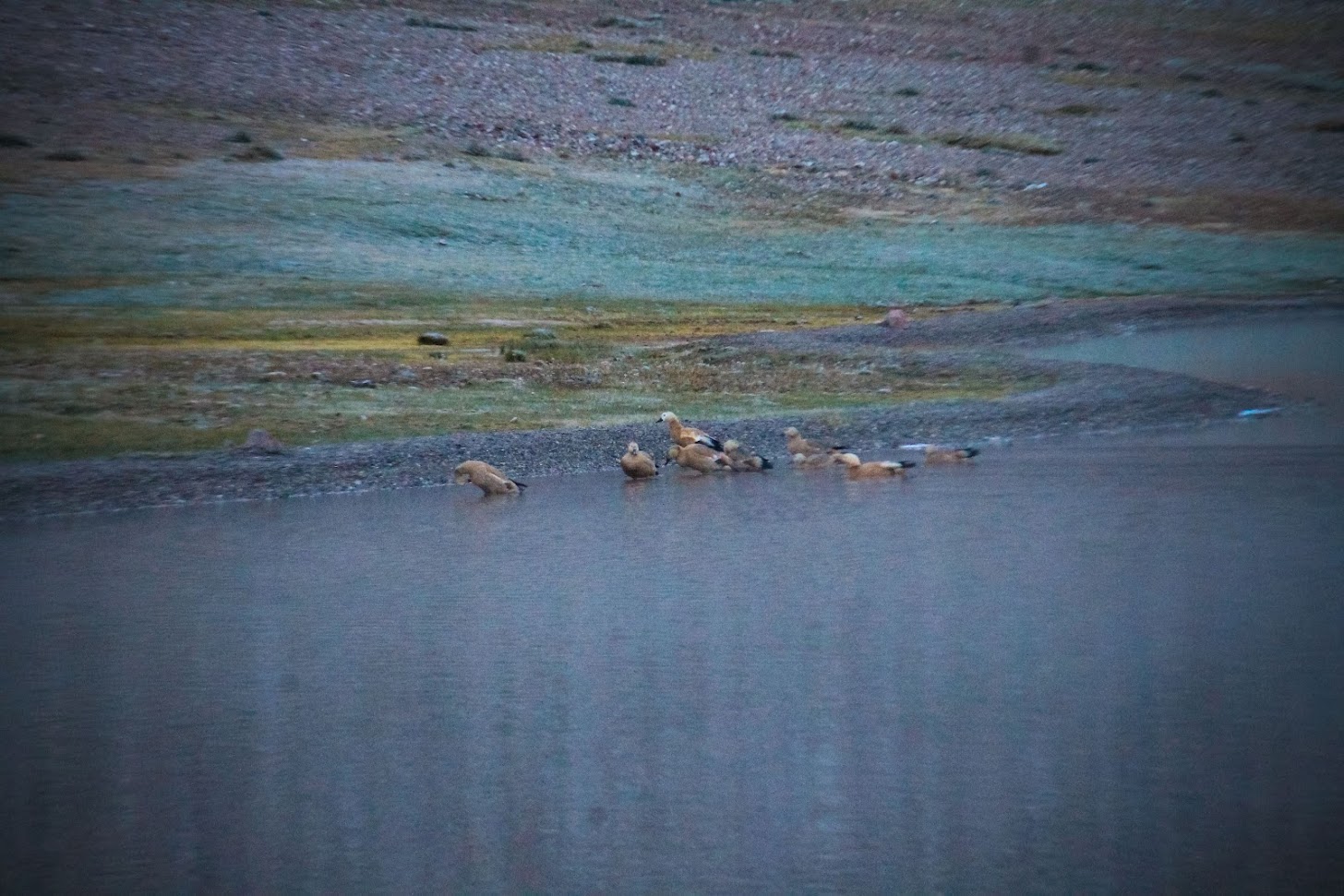 My duck friends were back ! I hurriedly got up to put on my boots just outside tent. My bare hands touched ice on zipper and on the tent. The boots were inside the shelter and thankfully had no ice inside them but the laces felt frozen. I somehow put them on walked out towards the lake with my camera. This time there were two duck families instead of one and they were walking on the shore. ACB was also out trying to take their picture which they didn’t like. I could take only 2-3 pictures before my camera battery died for good. I got wifey’s camera but couldn’t get any good shots. At that time I noticed that the tents, ground all around us was all covered with ice. The yak herd from last night was still in the same places but apparently was not grazing.

The sun was getting up in sky but we were on bottom of the peaks in their shadow. After a few minutes, I started walking towards the opposite side where I could see sunlight. I also wanted to see the water level in river. As I expected the water level had actually increased since last evening even though it’s usually lower in the mornings. The channels which were mostly dry only 10 hours before had water flowing through them. This was the final straw on any attempt for Samudri Tapu. I felt a bit dejected but little could be done at the time. I wasn’t really prepared for a solo trek at that time either.  When I reached back, the yak herd had reached near the lake and some of them were actually taking a dip in the water. 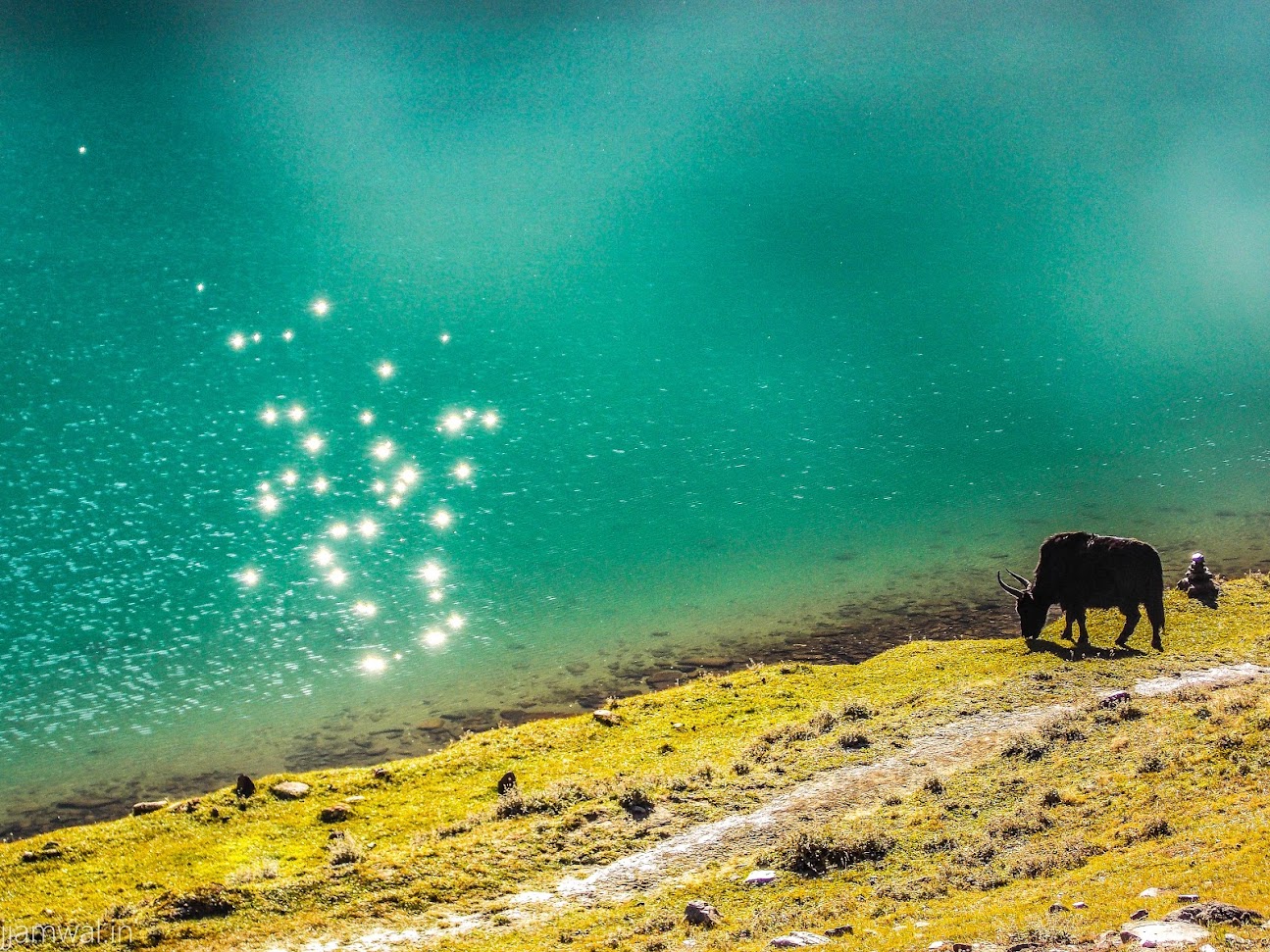 A yak grazing near chandrataal lake

People often say that some water bodies change their colours according to day time. This is very true for Chandrataal lake. The view is completely different early morning. Coming closer to the lake, I could see some insects inside the water and I picked some for a closer look. Tried to take pictures and battery on Nikon died too. So I don’t have any pictures, but the insects looked a lot like very small black-brown shrimps. Last time I had seen one kind which had put up small stone chips as a kind of shelter or armour around it’s body.