We woke up early morning and had one shower to make up for coming up  6-7 days of shower less existence. There is one big problem with Himachali plumbing system in hotels and most homes. There is no option to have pleasantly hot/warm/cool water. It is either scalding hot or freshly sourced from a nearby glacier. It’s OK if you want a bucket bath, but for people  who like a shower there is no respite. Mixers if present, don’t work. To top that the idiots had linked the toilet bidet to gyeser. Imagine the surprise.

After an annoying bath, we picked up our bags and started walking towards the taxi stand. That’s when I realised that I had packed too much things. The stuff we had picked from Manali was the proverbial last straw. But little could be done about the issue and we reached the taxi stand about 5-10 minutes late. The driver tied up our luggage on top of the taxi and we started the long drive towards Lahaul Spiti. 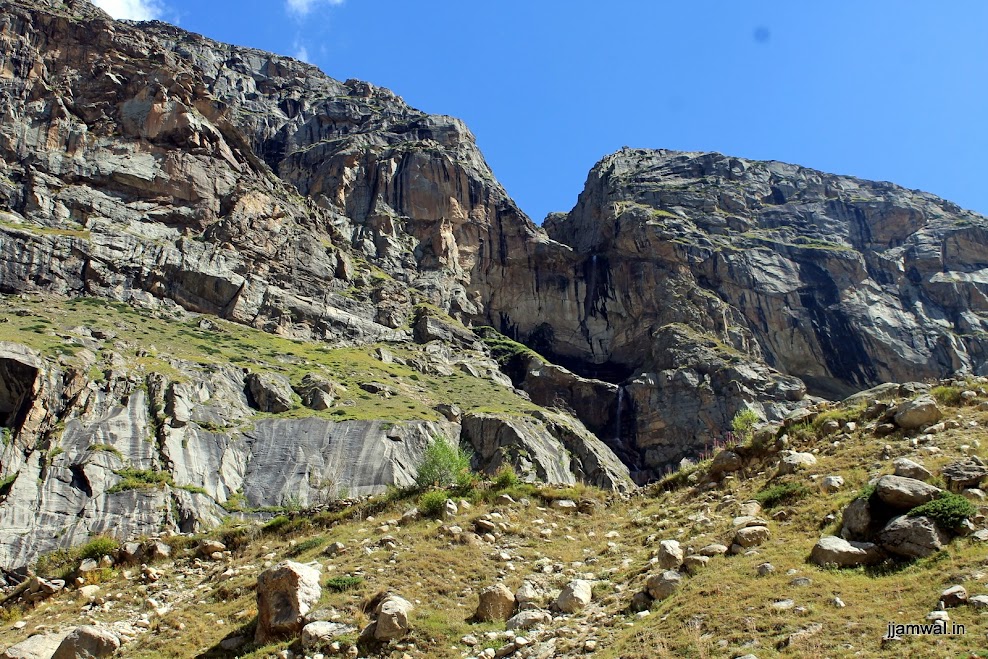 We stopped at a small place called Marhi full of dhabas and had light breakfast. Met one middle aged man from Chandigarh who was doing to whole Chandigarh Lahaul Spiti circuit on his bicycle. It was good to see more Indians getting the taste of adventure. His plan was to reach Batal by end of the day. Considering how the roads are and the altitude, I thought he’d be lucky to reach Chatru in the time, but he seemed confident.

Once we crossed Rohtang, the view of narrow valley with Chandra river flowing through came up, just like I remembered it. The dirt track or road as some people call it was just as bumpy, rocky and bone jarring too. A lot of unmelted ice banks, some as gray as the rocks were visible in a number of places.  Our next stop was Chatru  which had one less dhaba than the last time. Inspite of what the driver had promised, we were way beyond schedule and asked him when we could expect to reach Kunzum La as I knew that he’d stop at Batal for lunch too. He told me not to worry but I didn’t believe him  and was proven right later on. 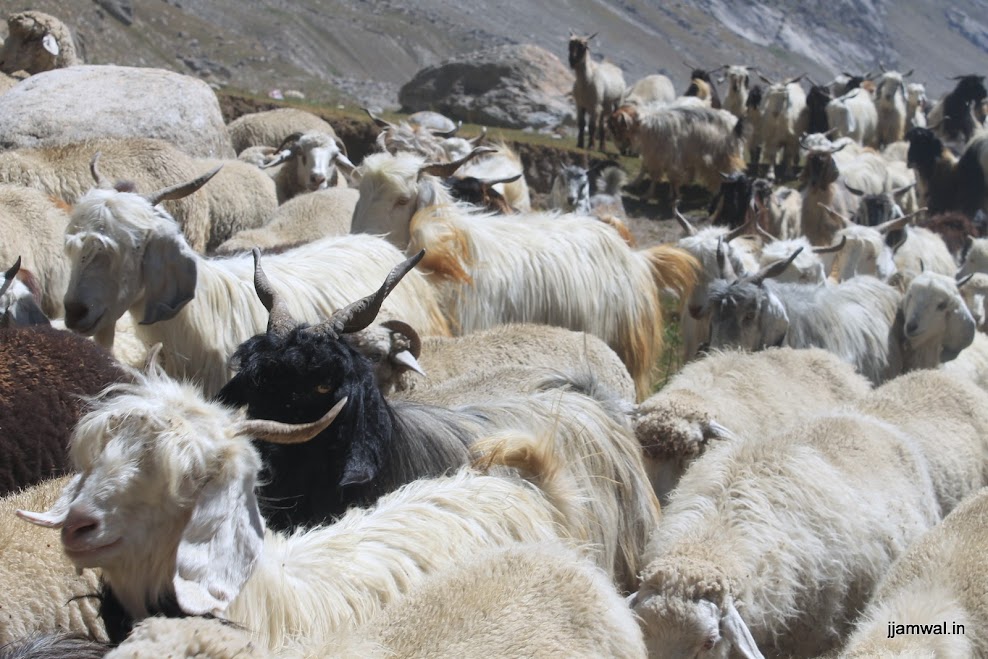 A big goat and sheep herd

Once we stopped at Batal, we had lunch of daal and rice. The old couple at Chandra dhaba was still there cracking almost the same jokes and jolly as always. The building that was under construction in 2012 across the road was completed and was being used as a rest house by BRO or PWD or some other organisation I don’t remember.

Driving on further, the stretch from Batal to Kunzum La was as treacherous as always and took as about 1 hour to cross that.The taxi laboured from one steep hair pin turn to another towards the top of mountain. Sitting inside, I grew excited as the destination came closer. The weight of rucksacks was in back of mind my mind, but I had done it once before and was confident of doing it again.   Kunzum La temple seemed a bit bigger and the whole passage was lined with large flags on poles which weren’t there last time. We reached there at about 2:15 pm instead of just around 12:30 to 1:00 pm as promised by the taxi people. So I wanted to hurry up before it got too dark and cold. 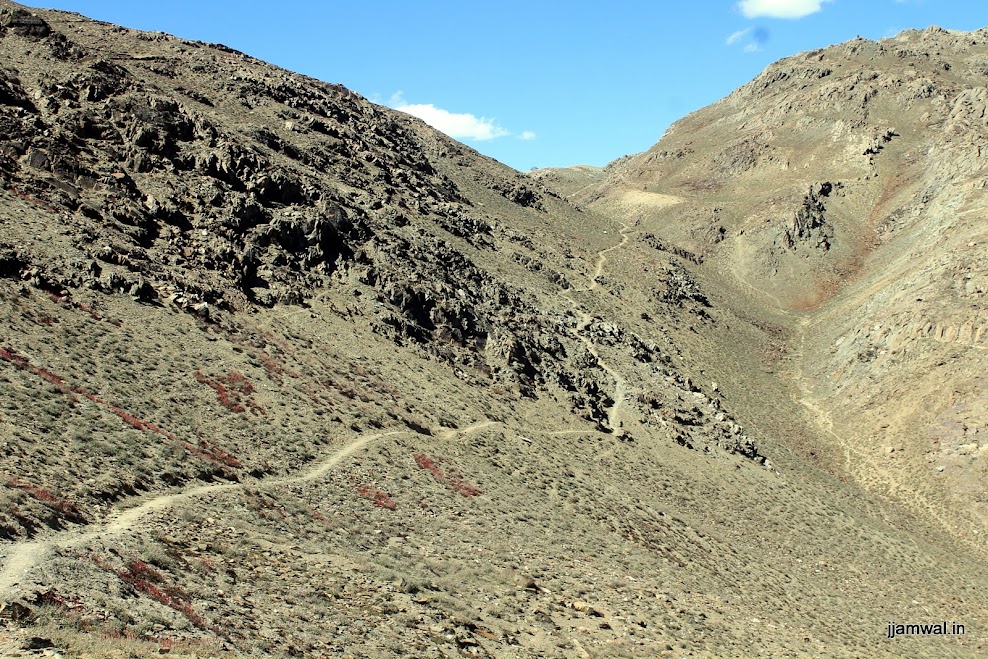 Once we got off the taxi, we started getting our luggage gathered and ready for the hike. Just as I gathered up all my stuff, a particularly strong gust of wind  blew my hat in to a deep ditch.  Once I retrieved it, we all put up our rucksacks on our backs . About that time, wifey and ACB wished that Jamaica could come to take away our bags. There were a few pretty tourists near the temple. I said that I’d consider taking them along if they carried the luggage. But as nothing like that was going to happen, we started walking. We had walked just about 10-11 steps when a car came up behind us honking like mad and Jamaica stepped out. He had came to Batal to pickup two French girls who were his guests and had enough space in the car for our rucksacks. His timing couldn’t have been any better. Goddess Kunzum was very kind to us that day and once again too, but that’s another story. ACB and wifey got Jamaica to take away our luggage and I got my pretty tourist girls to carry it.

We just kept our small backpacks and water bottles with us and sent rest of luggage with Jamaica. We took the trail and started the long hike. It felt good to be back in the place which never really went off my mind since the last time. All the “landmarks” which I remembered from last time like the stretch with sharp red rocks, a steep climb at end of it and first view of the lake a few minutes later were there as I remembered them. It is a very rare thing as the so called development destroys and mutilates whatever little natural beauty we have left. 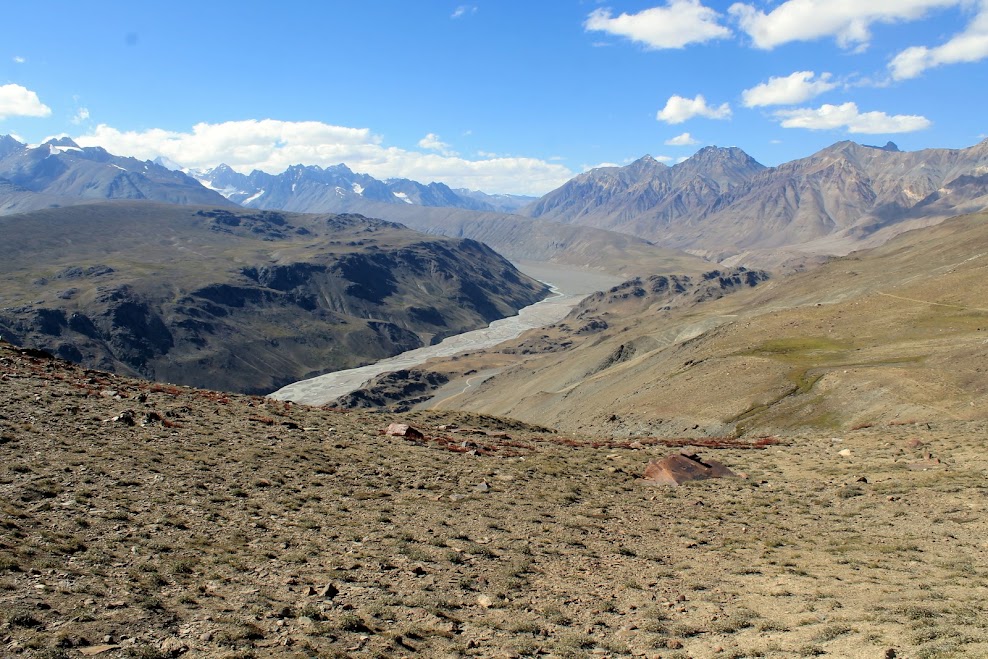 For some time, I walked in front while ACB and wifey were in back. But after a while, wifey started complaining of symptoms of high altitude sickness. She took the pill but it takes some time to show effect. So ACB started walking in front, while I stayed with wifey as she walked slowly, Our late start was proving to be costly as the strong wind which blows daily in the region was making life miserable. I wrapped a woolen scarf around my head but the wind managed to chill back of my head easily. At the same time, strong sun managed to make all the exposed skin red as a tomato in just 2-3 hours. 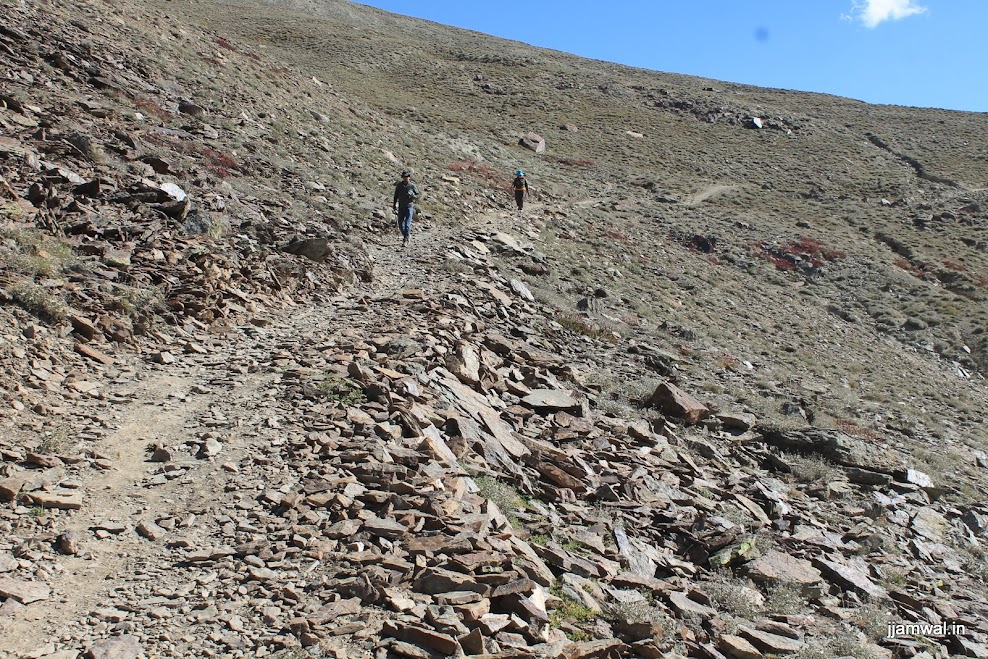 From a height, we spotted the new camp site but the only trail I could spot looked more like a goat trail and too difficult for wifey at that time. Later on, I found out that was the new path which was indeed difficult for a while, but much shorter. We didn’t knew at the time and just kept walking on the older trail which had an easier gradient. But it started getting dark and cold and we decided to get across a bit sooner. Getting down from the mountain proved to be a bit of trouble as the “path” I chose was a passage dug up by a glacier among rocks. It took us a lot longer than I initially expected but we got down and across the stream eventually. Once we climbed up the road, we started walking towards the camp’s direction. ACB seemed worried about my decision of direction as I had told him that the camps were in other direction earlier. Along the way he kept asking if I really knew the way. 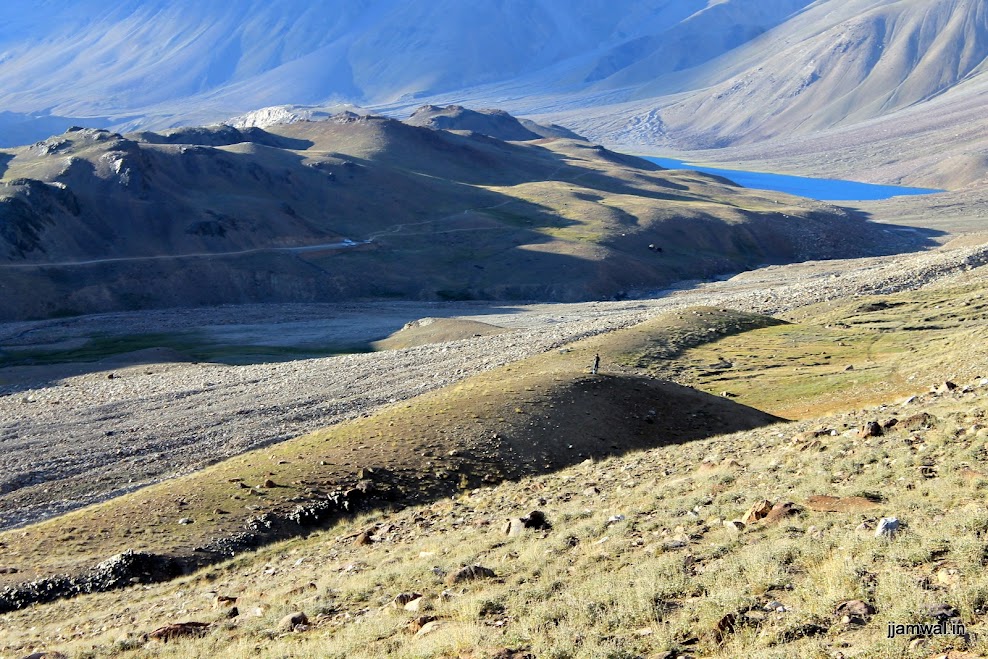 With Chandrataal in background, ACB, looking for a trail to get across

I too was not really sure on how to find the Jamaica’s camp in dark among all other campsites, but kept that thought aside. First priority was to reach the campsite, then to search for Jamaica’s. Once we were about half a km from campsite, a car carrying a tourist from Singapore came by from the lake’s direction. We requested them to drop us at Jamaica’s campsite. The tourist ( I forgot his name) kindly agreed and we all hopped in. Luckily for us, they were staying in the same campsite, another stroke of luck.

Once we reached the campsite, we took off our shoes and stumbled in to the kitchen tent where Jamaica was sitting with his guests, the two French girls we saw in car, Emili and Andrea. We had some chai, rested and then had some dinner. Jamaica said that he had spotted us on the mountain and whistled and shouted to get our attention as we had passed the trail but we couldn’t spot his signals. My pedometer read 8.70 km, but felt like 16 km. It probably would have been 2 km shorter if we had managed to take the newer trail.

At the time, neither one of us was in very talkative mood and we just entered our tents and fell asleep within seconds.