I took the overnight Himachal Tourism’s Delhi-Shimla Volvo bus and reached Shimla early morning. My driver VK with his Toyota Innova met me at around 8 am and we managed to get out of the city just before the morning rush started. Few km after Theog, we stopped in a small roadside dhaba for a breakfast of aaloo paranthas and chai. This was my first time on this route but I kept dozing off for 5-10 minutes every now and then due to lack of sleep in the bus. The views were pretty nice, specially after the heat, humidity and dust of Delhi but I was somewhat impatient for the higher altitudes.

Saw many such “structures” on the way

There were a lot of fruit farms on the way and harvesting was going on. So there were a lot of trucks and people working there.  After crossing Jeori, VK informed me that the road to Srahan was damaged in a landslide sometime back and we had to take an alternate road. That “road” was just a mud track on a high hill through fruit orchards. It was full of deep mud pools, rocks and everything got a good shake while we were on it. If I knew about it earlier, I’d have given Sarahan a miss. It was a nice enough place, more so for someone coming from New Delhi but not completely worth that ride.

After putting away luggage at the hotel, I walked out to explore Sarahan. The only obvious landmark was the large and ancient Bhima Kali Temple which overpowers everything else in the village. I am not that interested in temples, monasteries kind of places, but decided to give it a try. According to some accounts, human sacrifices were performed in the premises till only a few hundred years before. It was almost empty at the time with only a few locals chatting and 2 Indian tourists. There are multiple sections built of stone and wood which include guesthouse, a small eatery, smaller stone temples for some other deities, a museum, store house and so on. When I tried to enter the main complex, a policeman armed with an ancient Lee Enflield 303 rifle informed that visitors can not take any leather accessories, phones and cameras inside. So i put all of that in a locker, put on a red cap provided there and went inside. 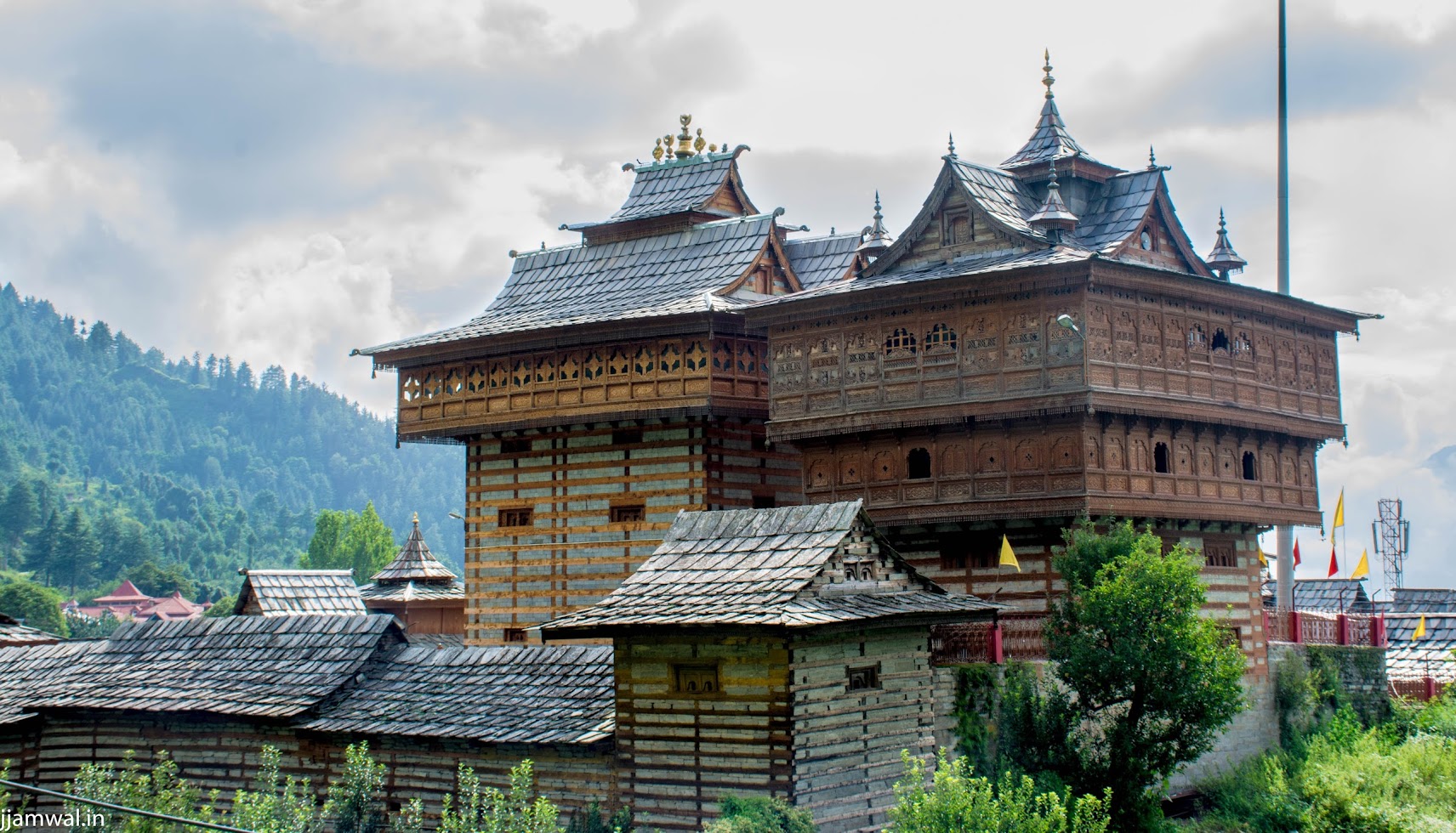 There was a board with a pretty interesting text about Goddess Bhima Kali, but photography was not allowed there and I don’t have a great memory. It read something like, ” When the mountains are overrun with demons and their misdeeds, I’ll take the avatar of Bhima Kali to destroy and consume them”. It is a very rough translation from a fading memory. It was much more poetic and impressive at that time.

The actual idols are now placed at an upper floor but the door was locked. A priest unlocked the door and went up after 3-4 other people came in while I was wandering around. I went up a few minutes later over a narrow flight of stairs. The sanctum had an old Bhima Kali idol in middle and smaller idols of various other gods and even Buddha in front of it. I walked around the temple complex a little bit more but there was nothing much to see. The museum was undergoing some renovations and rest of rooms were closed. There were a few large grey and black lizards lazing around in the sun. Saw a lot of them in the region over the next few days. 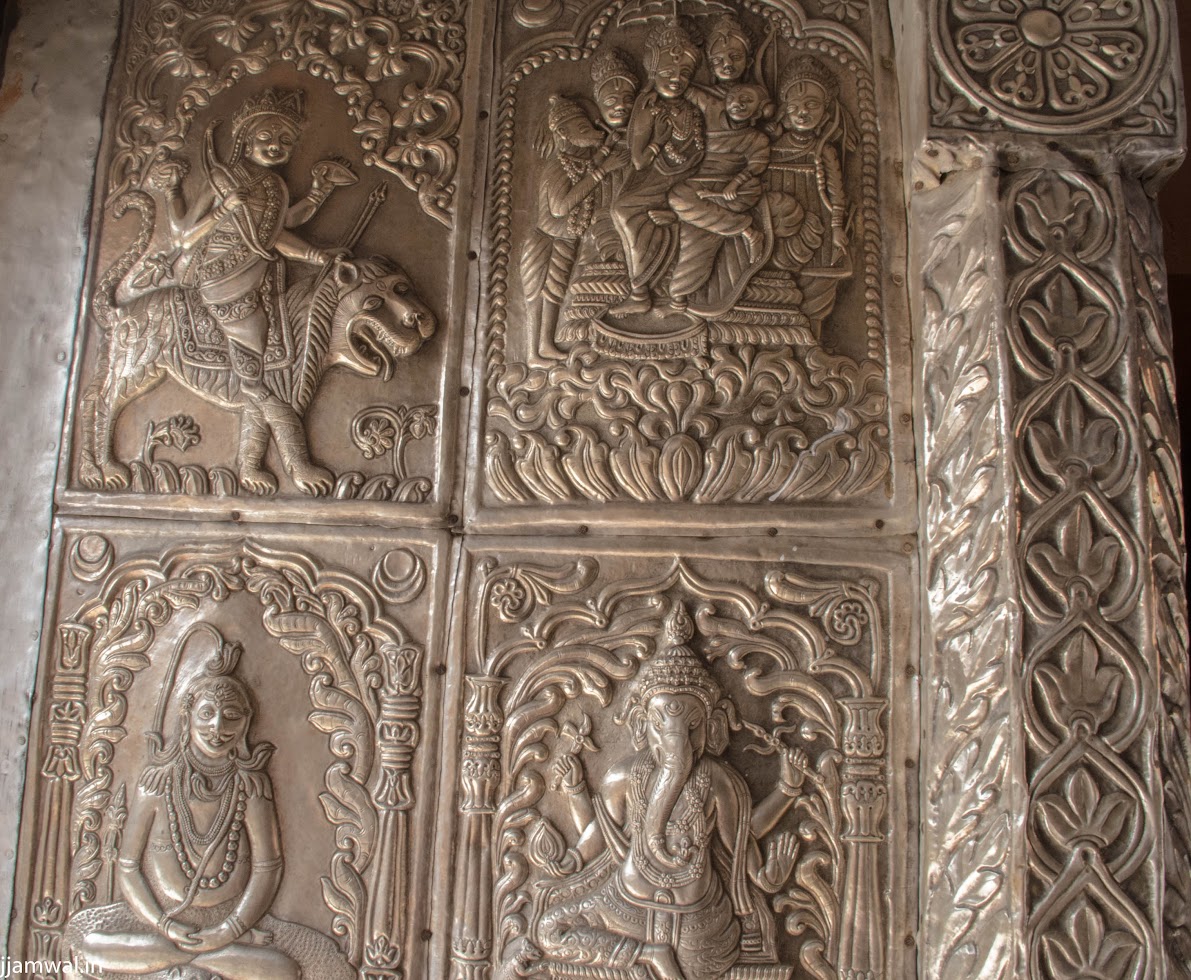 After I got out of temple, I walked around the town a little bit, but it was just a bunch of small shops selling usual stuff and guest-houses and hotels type of buildings. Near my hotel, I noticed a small stream coming down from the mountain. I briefly considered walking up the trail along it’s side but kept on walking back to hotel. It was too muddy and I was quite tired already. There was some kind of fair and festival going on nearby. I could hear a little bit of noise.Some people from the hotel and my driver went away to attend that. I had an early dinner and went to sleep soon after. 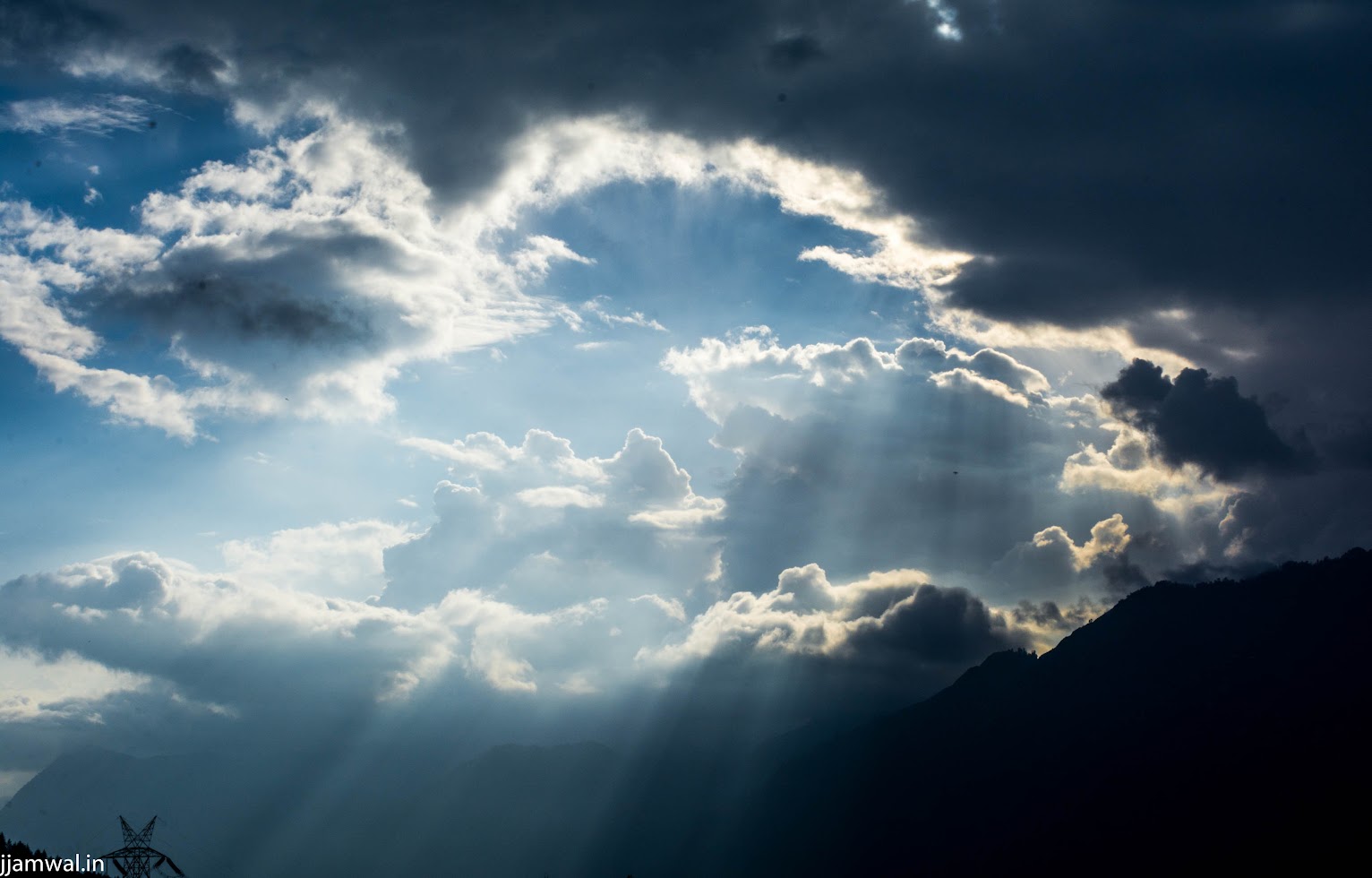 View from hotel in evening

We started early next morning but the drive down that mud road was as bad as ever. Thankfully, it was much better once we reached the main road. There is a big hydel power project on Satluj river in this area with multiple dams, tunnels and huge distribution network infrastructure points every now and then. There were signs warning about dangers associated with being too close to river in case water is suddenly released from any of the reservoirs upstream. A few  tourists have been washed away recently in such a way.

The weather was quite nice with some mist, cool breeze and clouds everywhere.We made a stop at Sangla for some minor repair on the car, but I didn’t like the place enough to spend more time there. There is an ancient fort, temple and some hiking trails and forested areas behind the main town. But we gave that a miss. Raksham which we passed later was much more picturesque. The beautiful river valley has a number of majestic mountain peaks, some of which were still covered in snow. There were beautiful fruit farms almost everywhere and colourful wild flowers growing in every available space. There was an ITBP checkpost on the way, where they noted down our details.

A beautiful mountain near road

Chitkul was a much smaller village with a few hotels. After having lunch in the hotel, I walked up to the river to take some pictures and kept walking alongside riverbank upstream till the trail ended at main “road”. There were only a few workers working on some new buildings and expansion of road which is little more than dirt track right now.

A view between Rakcham and Chitkul

Proceeding further up the road is prohibited due to it’s proximity with Tibet border and there is a ITBP checkpost and base to enforce the rule. The soldier manning the road barrier was quite friendly though. When I was walking back to the village, I saw a lot of Pikas. Normally it is quite rare to have them sit still for more than one second unless it’s early morning or late evening. But I must have photographed atleast 5-6 of them in one hour which is extremely rare, Most of them stayed still even in my near proximity and kind of posed for the pictures. Perhaps they were the reincarnated spirits of people who died while taking selfies.

One of many Pikas I saw

I walked through the village for a while and stumbled on to the famous Last Indian Dhaba by accident. A HRTC bus was about to start it’s 15-16 hours journey to Chandigarh via Reckong Peo and it’s passengers were just drinking tea or smoking. I had a cup of tea there before walking back to hotel as a drizzle started. I stayed there watching birds and grey skies, then grew restless as there was still plenty of daylight left. I put on my slippers and walked through the village streets. Locals paid little attention to me except a few idle glances every now and then.

There was a path at end of the village which led up towards the mountains and to a stream flowing down it. This was primary source of water for most of the village. I walked in the stream to take some pictures as it was barely 10-12 cm high.. Within seconds my feet were almost frozen by the cold water. A few seconds later, one of the slippers slipped off my feet and I vainly tried to chase it. Thankfully, it stopped against a rock a few meters downstream and I was able to retrieve it. Walking half barefoot down the village streets was not a very pleasant idea for me.

Stream behind the Chitkul village

While walking back, I asked some villagers about the trail going up the mountain. It was a walking route to some villages behind the mountains as well as the route for circumambulation around the majestic Kinner Kailash parvat.

A majestic looking jungle crow in the rain

I was considering staying in Chitkul for 2 nights, but changed my mind. It was a nice enough place, but I had seen most of it and wanted to leave the rest for some other time. Maybe my next trip will have more days specifically for this area. We left the place early next morning for Kalpa or some other place on the way.